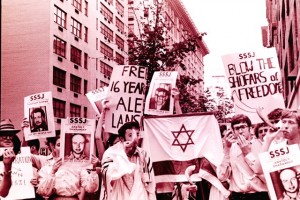 In September 1980 the Student Struggle for Soviet Jewry (SSSJ) called for a massive symbolic shofar blowing ceremony at the Soviet UN Mission. SSSJ sent letters to rabbis immediately before Rosh Hashanah, urging them to encourage congregants to join the gathering to protest an 85% decrease in Soviet Jewish emigration during the previous year.  SSSJ press releases noted that “the shofar blasts … symbolize calls to introspection and to action…” and will “call attention to this potential catastrophe – the closing of the gates just as we beseech G-d to keep them open.”   The phrase “Blow the Shofars of Freedom,” seen on a poster in the photograph of the event, references the blessing in the Shemonah Esreh prayer on the gathering of the exiles – a fitting slogan for the SSSJ.

The photograph is from the SSSJ Records in the Yeshiva University Archives.