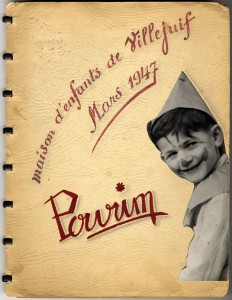 The photograph of a smiling boy in a clown suit looks like it could have been taken in any Jewish community in the world in 1947. However, the smiling child is a miracle – a Holocaust survivor. The illustration is the cover of a scrapbook of a Purim celebration in the children’s home in Villejuif, France, in 1947. The home in Villejuif was run by the Rescue Children, Inc. organization. Rescue Children maintained centers for children who survived World War II. The staff nurtured the children in body and spirit, providing Jewish education and helping them adjust to life after war. The organization tried to locate the children’s relatives and succeeded in uniting many families.

This scrapbook is from the Maurice Enright Papers. Enright was an American businessman who traveled to France several times after World War II on behalf of Rescue Children. He and his family adopted a young girl from one of the homes, and she donated his collection to the Yeshiva University Archives, which also houses the Rescue Children collection.