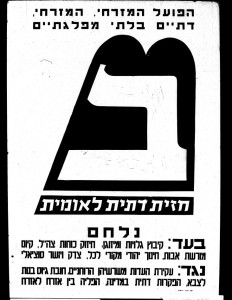 Elections for the 20th Knesset of the State of Israel will be held on March 17, 2015. A noteworthy feature of Israeli politics is the use of letters as visual symbols to identify political parties. Election posters vie for space on billboards in Israel. Streets and sidewalks turn into an alphabet soup representing a plethora of movements, factions, and philosophies. A list of the current parties’ symbols is on the Knesset website.

Sixty years ago, in 1955, this graphic image might have been on view: a bold letter “bet” within an outline of the Ten Commandments. This was the symbol of the Mizrachi party, which joined with HaPoel HaMizrachi for elections for the Third Knesset in 1955. The parties united under the name Hazit Datit Le’umit. The party still exists today, although it has undergone many transformations since 1955. Known as the Mafdal for many years, it is currently called HaBayit HaYehudi and represented by the letters “Tet Bet.”