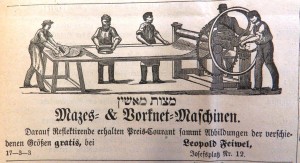 The first machine for rolling matzo dough was invented in 1838, towards the end of the period of the Industrial Revolution. This advertisement for a hand-powered mechanical matzo marvel appeared in the Ungarisch-jüdische Wochenschrift, (Hungarian Jewish Weekly), published in Pest, Hungary, in 1871. The modern, innovative equipment engendered great halakhic controversy: Could the machine really be thoroughly cleaned of dough and crumbs? Would using the machine endanger the livelihood of the matzo workers? These questions and others that arose have been debated in Jewish legal literature, and the discussion continues to the present day.

The Ungarisch-jüdische Wochenschrift, a short lived periodical published only from 1871 to 1872, is just one example from the Mendel Gottesman Library’s growing collection of rare Hungarian Judaica. Recent additions to the collection were made possible by the Zoltan Erenyi Charitable Fund at the Jewish Communal Fund.