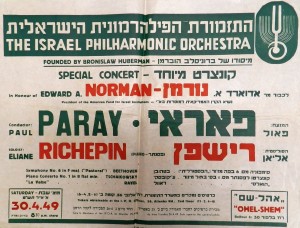 Musical celebrations for Yom Ha’Atzma’ut are part of the festivities. Israel boasted an orchestra, the Palestine Symphony Orchestra, even before the State of Israel was born. It was founded by violinist Bronislaw Huberman in 1936, to provide positions for musicians fleeing Nazi ruled Germany and simultaneously creating a venue for superb classical music in pre-state Israel.  Today it is known as the Israel Philharmonic Orchestra.

This poster for a concert dates from April, 1949, just prior to Israel’s first birthday.  The concert was in honor of Edward A. Norman, president of the American Fund for Israel Institutions, which he had created in 1939.  The fund supported the Israel Philharmonic, and eventually focused solely on cultural activities, as it continues to do under its current name, the America Israel Cultural Foundation.

The poster is part of a scrapbook of Edward A. Norman’s trip to Israel in 1949 on behalf of the Fund. The scrapbook was a gift of Nancy Norman Lassalle.