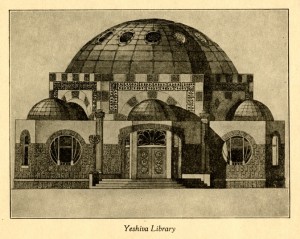 On May 25, 1925, a few days before Shavuot, 1200 men and women attended a $1000 a plate dinner celebrating the groundbreaking of the new buildings of the Rabbi Isaac Elchanan Theological Seminary (RIETS) and the planned Yeshiva College (YC). The Million Dollar Dinner, as it was known, took place in the great main ballroom of the Hotel Astor in New York. The invitation to the dinner included a letter by Harris L. Selig, executive director of the building fund, which described the buildings: “Another striking example of Jewish architecture will be the Yeshiva Library… The Library, topped by a massive dome, resembles somewhat the plans for the Hebrew University at Jerusalem…”

Despite the financial support, Zeitlin’s representation of RIETS at the opening was not a foregone conclusion. Zeitlin hand-carried a Hebrew letter from Rabbi Dr. Bernard Revel, President and Rosh Yeshiva of RIETS to Rabbi Abraham Isaac Kook, Chief Rabbi of Palestine. Rabbi Dr. Revel asked R. Kook whether or not he planned to attend the opening of Hebrew University, and explained that Zeitlin was instructed to follow R. Kook’s decision. If R. Kook was going to the opening, Zeitlin would represent RIETS and read a letter of greeting which Revel had prepared. If R. Kook was not participating, Zeitlin would represent only the Jewish Academy of America which was sponsoring his trip as well.

Revel expressed trepidation about the potential character of the Hebrew University and requested guidance in his question to R. Kook: “The world of knowledge and the political world are very interested in the opening of this national institution, but our heart is full of fear, what will be the nature of this institution and if it won’t, G-d forbid, turn into a stumbling block to true Judaism. The teachers who have been appointed thus far appear to be appropriate and this institution may continue in a proper spirit, if we don’t distance ourselves from it. And therefore we, the heads and directors of the holy Yeshiva, are perplexed as to whether or not it is proper for the Yeshiva to participate in the work of the college and to greet it at its opening.” Revel’s concern seems to have stemmed from the composition of the Hebrew University at the time; when the university opened its main school was an Institute of Jewish Studies. 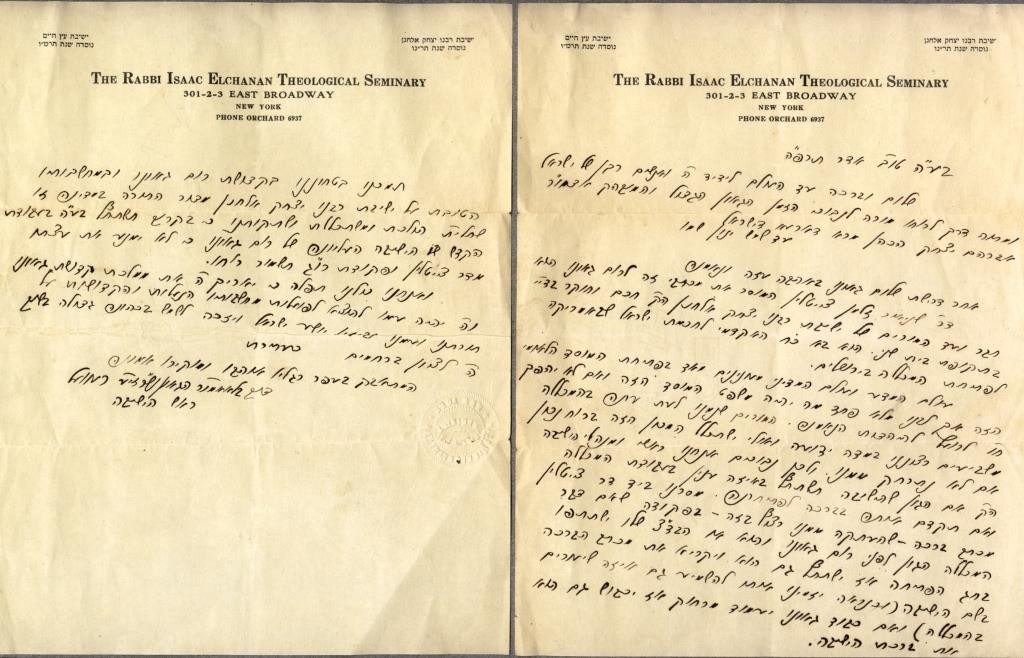 Correspondence between Zeitlin and Revel in the Yeshiva University Archives reveals that Zeitlin did indeed represent RIETS at the opening of the Hebrew University and also served as a spokesman and emissary for RIETS during his visit to Jerusalem. He spoke to a number of academics at Revel’s request and asked them to send offprints of their articles to the library. In addition, he helped arrange for Dr. Samuel Klein to teach a course on Palestinian Archaeology and Geography in the summer school at Yeshiva.

Revel also asked Zeitlin to speak to R. Kook about sending a telegram of greeting for the May 25 dinner in May, and R. Kook obliged – a Yiddish version of the telegram is extant in a press release in the Yeshiva University Archives. The connection between Revel and R. Kook probably dates to R. Kook’s visit to the United States on behalf of the Central Relief Committee in 1924 when R. Kook also lectured at RIETS.

At the May 1925 groundbreaking dinner, some of whose attendees had just returned from the Hebrew University opening, Revel described the proposed Yeshiva College and made a comparison with the Hebrew University: “If American Jewry is not to lose its identity, if it is not to be swept away by the tide of ignorance and indifference, by religious vagaries and by semi-religious and irreligious aberrations, we must return to the Torah. It was therefore resolved to enlarge the work of the Rabbi Isaac Elchanan Theological Seminary, which is now the largest theological seminary in the world, and to move in to more academic quarters and to establish in connection with the Seminary, a College of Arts and Sciences for the enrichment of Jewish and general culture, where the Jewish studies will be on the same plane of importance and dignity as the classical and modern cultures. … With the completion of the Yeshiva of America [RIETS/YC], New York and Jerusalem, with its Hebrew University, will become the world’s Jewish cultural centers,” Dr. Revel said. He pointed out that the war [World War I] and its aftermath, together with the anti-Jewish policy of the Soviet Government, had practically wiped out all the great centers of higher Jewish learning in Eastern Europe, formerly the mine of Jewish culture… 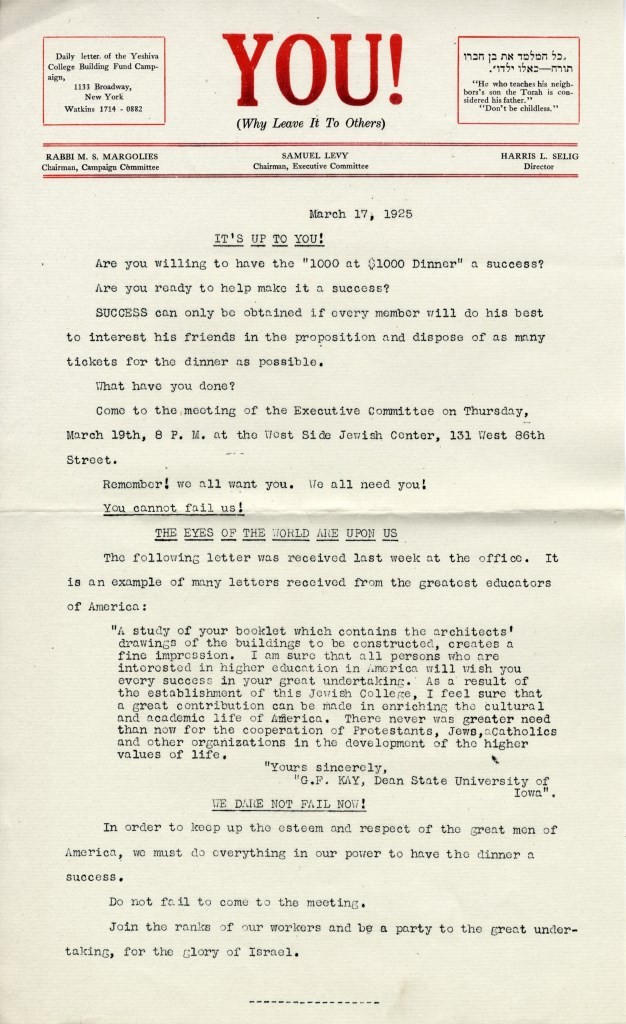