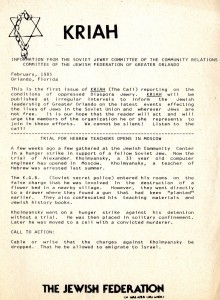 Eva London Ritt of Orlando, Florida, has presented her personal collection of materials from the Soviet Jewry movement to the Yeshiva University Archives. Ritt dedicated the collection of correspondence, newspaper clippings, photographs and artifacts on work to free Soviet Jews during the 1970s and 1980s in memory of her late husband David Elliott Ritt who, she said, was her greatest supporter, and in honor of all those who participated with her in this effort.

The documents and memorabilia supplement the YU Archives’ more than 300 archival boxes from Student Struggle for Soviet Jewry (SSSJ) founder Jacob Birnbaum’s  collection. Ritt noted that Glenn Richter, former national coordinator of SSSJ, interviewed her and other former Soviet Jewry activists as part of an ongoing oral history project that he is donating to YU. He also encouraged her to add her collection to the YU Archives.