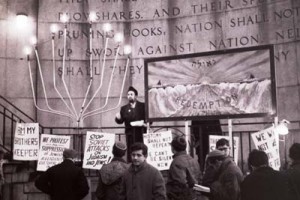 The Kiddush recited on the Sabbath and Jewish holidays – including the cycle of holidays we recently celebrated – invokes the memory of the Exodus from Egypt – zekher le-yetsi’at mitsrayim. May 1, 2014 marked the 50th anniversary, the yovel, of the birth of another Jewish saga of deliverance, the story of Russian Jews. The Student Struggle for Soviet Jewry (SSSJ) was born at a student meeting called by Jacob Birnbaum on April 27, 1964. The momentum Birnbaum generated at this gathering culminated a mere four days later in a ”May Day Demonstration” at the Soviet Mission to the United Nations. This protest, attended by 700 young people carrying handwritten signs with the slogan: “Why no matzohs?” set the pattern for future SSSJ action. Jacob Birnbaum, the founder and creative force behind the SSSJ, unleashed the power of the biblical depiction of the Exodus in the effort to free Jews from the shackles of Soviet Union. Birnbaum pierced the Iron Curtain by uniting the majesty and awe of Jewish symbols with peaceful, legal, demonstrations and civil rights techniques. This approach galvanized a generation of students, many of them children of Holocaust survivors, determined not to stay silent in the face of oppression of their Jewish brethren.

Jacob Birnbaum was born in Germany in 1926, and raised in England. He passed away in New York on April 9, 2014. Birnbaum moved to the United States in 1964 with the aim of fighting growing antisemitism in the Soviet Union. Based on his previous Jewish communal experience working with Moroccan Jewish refugees in North Africa and France, he believed that students were more likely to respond to calls to action than their elders. He hoped that the creation of a grass-roots movement of students would exert effective pressure on the established Jewish leadership to take up the cause. Birnbaum settled on Amsterdam Avenue in Washington Heights, in northern Manhattan, near Yeshiva University, which he used as a base to mobilize students on behalf of Soviet Jewry. He lived in Washington Heights the rest of his life and his association with Yeshiva University continued.

Yeshiva University awarded Jacob Birnbaum the Mordecai Ben David Award in 1988 and an honorary doctorate in 2007. The records of the Student Struggle for Soviet Jewry, including correspondence, telegrams, photos, audio recordings and video, are housed at the Yeshiva University Archives. This photo of Dr. Birnbaum at the Pre-Passover All-Night Vigil at the Isaiah Wall at the United Nations on April 2, 1966 is just one of thousands of items in the SSSJ Collection. 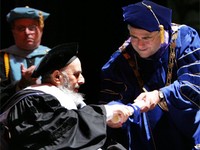