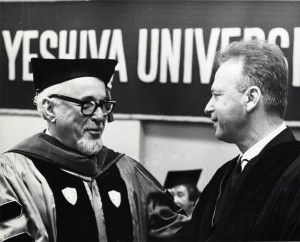 Yeshiva University and Yitzhak Rabin enjoyed a long-standing relationship, beginning in June 1968 when Rabin, then Israel’s Ambassador to the United States, was awarded an honorary Doctor of Laws degree at the University’s 37th commencement. Rabbi Dr. Samuel Belkin, president of the University, stated in his citation that Rabin was “inspired by the prophetic vision that in our day the world ‘shall beat their swords into ploughshares and … nation shall not lift up sword against nation.” The following year Rabin visited the University and spoke at a Yom Ha’Atzma’ut student assembly celebrating Israel’s 21st Independence Day. In 1986, on the occasion of the University’s 100th anniversary, the University’s Centennial Leadership group visited Israel and Defense Minister Rabin addressed them. As Prime Minister of the State of Israel, Rabin received the Second Century award from Yeshiva University in 1993. Rabin’s speech emphasized the hope of “peace with security.” This year marks the twentieth anniversary of Rabin’s assassination on November 4, 1995. Yeshiva University President Rabbi Dr. Norman Lamm eulogized him at memorial services in Lamport Auditorium, which was overflowing with students.

The Center for Israel Studies is holding an academic conference, “Yitzhak Rabin: Twenty Years After” on Sunday, November 1, 2015, at 10 AM in Weissberg Commons, Belfer Hall, 2495 Amsterdam Avenue, New York, NY 10033.