The Rise and Fall (Literally?) of a Former YU Building 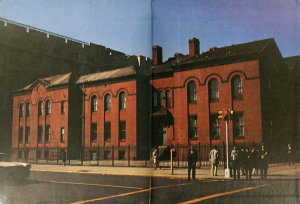 Not just yet, but the end may be near for the building that served as Yeshiva University’s Brooklyn High School for Boys (BTA) from 1954-1967. This 1878 building, owned by the City of New York and unoccupied for the past 20 years, is in such dismal condition at present that despite its historic significance, is has been proposed for demolition according to the City’s Unsafe Demolitions Program.

The building is listed in the State/National Register of Historic Places and was granted NYC Landmark status in 2007. These agencies noted the building’s value as representative of late 19th Century school architecture with a high degree of period integrity, as well as its historic importance both as a remnant of when the independent town of Flatbush was evolving from an agricultural village to a suburban area, and as part of its rich educational history.

The building is located at 2286 Church Avenue, cornering Bedford Avenue, in the section of Brooklyn currently known as Prospect-Lefferts Gardens. It served as Flatbush District No. 1 School from its construction in 1878 until 1894, when it was renamed Public School No. 90 after Flatbush was annexed by Brooklyn. It was built to replace the wood-framed 1845 Flatbush Village School, located on the same property, and is in close proximity to the site of Flatbush’s original 17th century schoolhouse.

John Yapp Culyer, a landscape architect and civil engineer who had worked on numerous projects in Brooklyn, including several under Frederick Law Olmsted, was selected as the architect for the project. Culyer’s design reflected the style used for nearby public schools referred to in Europe as Rundbogenstil (“round-arch style”), often blended in the United States with Romanesque-Revival style, and one well suited for schools because of its durability, sufficient fenestration and speed of construction. The school was built as a two story structure with a partially raised basement in an H-shaped plan, measuring 53 feet by 85 feet. It was constructed in less than a year for a total appropriation of $20,000. A large, complementary rectangular-shaped addition on the southern facade was built in the 1890s to ease overcrowding. The architect of the addition is not known.

The building remained in use as the elementary school P.S. 90 until 1951. From 1954 until 1967, it was leased by Yeshiva University for the Brooklyn branch of its High School for Boys. This was the second location of this YU high school, which had been at 1060 President Street in Crown Heights since it was opened in 1945. Students of the school while it was at the Flatbush location include Alan Dershowitz and Steven (Shlomo) Riskin. In September, 1968, the school moved to YU’s renovated high school campus at 1277 E. 14th St. The building was subsequently occupied by the Beth Rivkah Institute, a school affiliated with the Chabad-Lubavitch movement, which remained there into the 1990s. 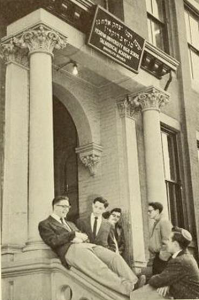 No date for demolition has been scheduled as of yet, however the City has been proceeding in accordance with its intention to do so by producing a Historic American Buildings Survey, required for historically significant buildings that are proposed for demolition. The authors of this survey have found the historic photographs and other records in the Yeshiva University Archives to be of great assistance in documenting the architectural details of the building, many of which have deteriorated. These materials have also been helpful in establishing the timeline of any modifications to the original structure. Additionally, the Archives holds virtually the only extant visual record of the building’s interior, as no other could be located , and the building is presently at risk for collapse and is therefore inaccessible. This record consists almost exclusively of images from the Archives’ collection of The Elchanite, the school’s yearbook. The Archives is most gratified to be able to provide invaluable assistance to the City of New York in its documentation of this historic building.

Do you have memories of attending school or events in this building? Please share them with us.

For a sampling of historic images of exteriors and interiors of this building from the Yeshiva University Archives, click here. Additional images can be found in issues of the Brooklyn Elchanite from 1955-1967, available online at https://archive.org/details/yeshivauniversity?and[]=brooklyn%20elchanite