A Mobile Digitization Lab Comes Uptown Purim in the Vernacular

“New” Views of a Historic Building 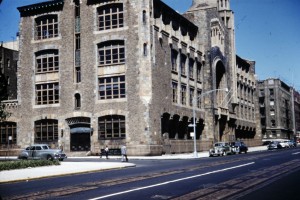 Yeshiva University Archives recently acquired three new perspectives on Zysman Hall, which shed light on different periods in the building’s life since its cornerstone laying in 1927. 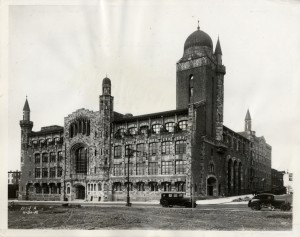 A black and white photograph of the edifice, taken for a news agency just prior to its dedication in 1928, depicts Amsterdam Avenue in a raw and unfinished state. Less than a decade later, the blue and white pennant proudly flew in a dormitory room in the bustling building, which housed the high school and college.

The pennant was purchased on e-bay from the grandson of its original owner, Edward Tenenbaum. Tenenbaum, a Harlem native, attended Yeshiva College and graduated in 1937 at the age of 19. He was the assistant business manager of the 1937 Masmid. The pennant was created when Yeshiva still hoped to complete its proposed Herts-Meyers campus, designed in 1926, thus the building was identified as the “Auditorium & Dormitory” since many buildings were expected to follow. The original projected campus was never finished in that style; the pennant and the drawings of the unbuilt campus are a tribute to Yeshiva’s dream at the time.

Although the 1920s plan for a sweeping, dramatic, campus was not realized, the institution and the campus continued to grow. The color slide from 1956, half a century ago, shows a drastic change from the 1928 photograph – cars, trolley tracks, and students populate a vibrant street scene. More information about the plans for the Washington Heights Charles B. Meyers and Henry B. Herts campus is available here: https://blogs.yu.edu/library/2010/11/17/dining-for-the-divine-the-tradition-of-the-chanuka-dinner-in-building-yeshiva/