Purim in the Vernacular

“… So that each man may speak the language of his people” is a translation of an excerpt of a verse from Megilat Esther [Chapter 1:22]. Minhagim books, concise compendia of Jewish laws and customs, emerged as a literary genre in the 1600s. Designed for a popular audience, many of them were written in Yiddish, the vernacular of much of Ashkenazic Jewry. Some editions included illustrations for specific holidays. One such work, housed in the Library’s rare book room, published in Amsterdam by Shlomo Proops in 1722, explains its objective on the title page: “written in Taytsh (Yiddish) especially for women and girls who don’t understand Lashon Kodesh [Hebrew], every law is listed, … also in this edition… many pictures were inserted so that children will accustom themselves to the commandments….” An example is this illustration of Purim revelers. 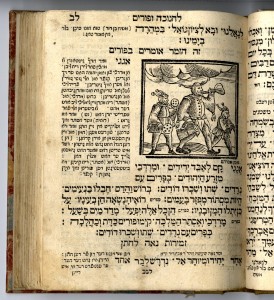 Works of Jewish law and texts in English for a general audience are now a staple of American Jewish Orthodox life, perhaps hearkening back to the tradition of Yiddish minhagim books. It is fitting that in 1976 the first-born book of the ArtScroll press was an English translation and commentary on the Scroll of Esther, published for Purim, the holiday when each person is enjoined to speak his native tongue. In the past forty years, ArtScroll, the publisher that speaks your language, has grown and flourished. In addition to English materials, it publishes Judaica in French, Russian, and Spanish. In March 2005, ArtScroll’s Schottenstein Talmud, an English translation and commentary of the complete Talmud, was presented to Library of Congress with great pomp and circumstance, enshrined as an American Talmud for the 21st century. The status of Judaica in the vernacular has come a long way from the days when it masqueraded as pedagogical material geared for women and children.