Purim in the Vernacular Pesach, Prohibition, and the Grape Juice Wars of the 1920s

The Library recently digitized the early minutes of the Board of Directors of the Yeshiva, which date from the late 1880s through 1922. The minutes, handwritten in Hebrew, with some English and Yiddish mixed in, are available in their entirety on the library’s website (manuscript 765). Many aspects of the school’s administration, from finance to firing to philosophy, may be gleaned from the minutes.

A formative event in the growth and history of Yeshiva University, the birth and progress of the fledgling high school, is described in the minutes. The high school is currently celebrating its centennial.

The Marsha Stern Talmudical Academy (Yeshiva University High School for Boys) was founded a century ago, in 1916, when the school was located on the Lower East Side. The school was the brainchild of Rabbi Dr. Bernard Revel, the President and Rosh Yeshiva of Yeshiva Etz Chaim (founded 1886) and the Rabbi Isaac Elchanan Theological Seminary (RIETS, founded 1896), which merged in 1915. Revel’s vision for the high school is described in the minutes of September 17, 1916: “the Yeshiva founded an upper school, known as a high school, which would offer secular studies [in addition to the traditional Yeshiva curriculum]. The school should have qualified teachers, and be run according to the standards of New York City high schools run by the Board of Education.” Indeed, the high school already was advertised in Ha-Ivri, a Hebrew periodical, in September 1916. 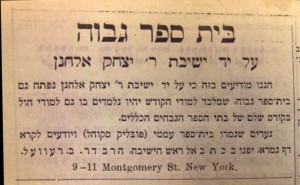 Tension regarding the school’s mission is not explicit, but can be read between the lines in the minutes of November 19, 1917. Revel, the pragmatic, yet visionary leader, addressed the implied critique and stated: “…since the emigration from Eastern Europe has ceased [due to World War I], promising young bnai Torah, young Torah students, can’t come to America, thus the opportunity to maintain and strengthen Torah here lies with boys born in this country. If we don’t give them their due in what they request in secular studies, they certainly won’t go to the Yeshiva for religious studies. We can easily imagine what the future [of Judaism] will be from this situation. Therefore the high school will continue to offer the current program of religious and secular studies in the future.”

On July 1, 1919, as recorded in the minutes, Revel proudly reported to the Board that, “…with thanks to the Almighty, the first high school graduating class has been successful in two paths – in religious studies and in secular studies – and that the high school graduation would take place in the Yeshiva building on July 8.”

The minutes of Feb. 9, 1920, document Bernard Revel’s initial suggestion for another stage in higher education, modeled on the high school. “In regard to the current question – since the high school is successful, as we see from the number of students who graduated last year and the number who will graduate this June, some of the students who excel desire to go further in their studies and want college and university studies – therefore it is time to think about founding a ‘normal school’ under the auspices of the Yeshiva.”

The suggestion was approved by the Board and is the first glimmer of what eventually became Yeshiva College (YC), founded in 1928. RIETS and the high school moved from the Lower East Side to join YC in the new Moorish Revival style building on Amsterdam Avenue in Washington Heights in 1928, and thus began a new chapter in Yeshiva’s history.