Behind the Scenes at Yeshiva, 1886-1922 Dr. Shelley Ray Saphire, Talmudical Academy and Yeshiva Pioneer, Reminisces in 1965

Pesach, Prohibition, and the Grape Juice Wars of the 1920s

This year, just in time for Passover, Welch’s®Grape Juice Brand and Manischewitz®  are collaborating on the production of kosher grape juice for Pesach, under the kashrut supervision of the Orthodox Union. This venture is not the first time Welch’s has produced kosher grape juice; it revives an eighty-nine year old pioneering effort by Welch’s, which made “kosher unfermented wine” for Passover in 1927.   The “unfermented wine” was, of course, grape juice by a different name. An advertisement for the product appeared in the United Synagogue Recorder (April 1927) and stated that it was “made by the Welsh Grape Juice Company under the supervision of the Union of Orthodox Rabbis of the United States and Canada – אגודת הרבנים – recommended by the United Synagogue of America for all religious functions.” The ad further noted that no permit was necessary for the unfermented wine and that it was “lawful in all respects.” 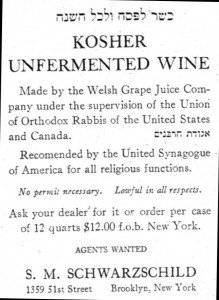 The story behind the creation of the “unfermented wine” is the era of Prohibition, ushered in by the adoption of the Eighteenth amendment to the Constitution in 1920 which prohibited alcoholic drinks from being produced, sold, or transported in the United States. Certain exceptions were created for sacramental wine for religious purposes.  The exemptions led to abuse and newspaper reports of the time featured articles on bogus rabbis and the proliferation of non-Jews as members of synagogues, unmasked by Federal Prohibition agents. This illegal and embarrassing turn of events led to rabbinic discussion and efforts to resolve the situation.

The general approach of the Conservative movement was to recommend the use of grape juice rather than wine. This followed the opinion of Louis Ginzberg, a Talmud professor at the Jewish Theological Seminary and chair of the Committee on Interpretation of Jewish Law of the United Synagogue. Prof. Ginzberg had studied at the Telz and Slabodka yeshivas in Lithuania before studying at German universities. He wrote a lengthy responsum in Hebrew in 1922 explaining that grape juice could be used for Kiddush and other religious rituals in place of wine. The Rabbinical Assembly, at a conference session, officially sanctioned use of “unfermented wine” for all religious purposes. Prof. [Moses] Hyamson, however, pointed out that grape juice must be made according to the Jewish dietary laws and the shortage of kosher grape juice will present a problem.  The session, which was held in secret, was summarized in an article in the Providence Journal (Jan. 27, 1922). The article also stated that “the Rabbinical Assembly had assumed the task of converting Orthodox Jewish rabbis to its views on the subject.” A committee planned to meet with Orthodox rabbis to persuade them “to look upon the wine question in a more modern light.”  “The Orthodox rabbis have stoutly maintained that fermented wine must be used in Jewish ceremonials.” The Assembly hoped that if Orthodox and Conservative rabbis could agree on the use of grape juice, “united Jewry could inform Congress that it did not need any special privileges from the Prohibition Enforcement Director,” and future scandals would be averted.

Although the use of grape juice for Kiddush is generally accepted today in Orthodoxy that was not the case in 1922.  A discussion of Jewish law regarding this difference in practice is far beyond the scope of a blog post. The wine vs. grape juice divide may be one of the markers of the growing boundary between the Orthodox and Conservative movements in the 1920s.

The Orthodox position on the use of wine during Prohibition is reflected in a statement by Rabbi Herbert S. Goldstein, president of the Union of Orthodox Jewish Congregations, published in the Jewish Forum (available on the 5th floor of the Gottesman Library) in December 1925, entitled “A Year of Orthodoxy.” Under the topic of “sacramental wine,” Rabbi Goldstein stated that although the privilege of using wine for ritual purposes has been abused, nonetheless the “mitzvah min ha-muvhar,” the highest level of fulfilling the commandment, is to use wine, and that practice should not be abandoned. He further recommended denouncing, “in no uncertain terms” any violation of prohibition law in regard to sacramental wine.  Judah David Eisenstein, a lay Orthodox leader and editor of the Hebrew encyclopedia Otsar Yisrael, wrote in his memoirs that there is no reason for Jews to be “more religious than the Pope.” In Eisenstein’s estimation, Prof. Ginzberg’s opinion on grape juice is only applicable in an emergency, and since the government permits wine for religious use, there is no reason to use grape juice for ritual purposes.

Prohibition was finally repealed in 1933, when the ratification of the Twenty-First Amendment to the Constitution repealed the Eighteenth Amendment. The kosher wine and grape juice industries in the United States and elsewhere have grown and prospered since then.