Pesach, Prohibition, and the Grape Juice Wars of the 1920s Matan Torah: A vision in Amsterdam, 1723 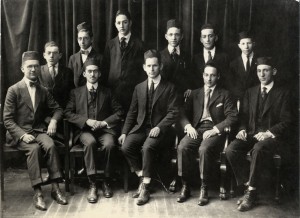 First Graduating Class of the Talmudical Academy, 1919. Dr. Shelley Saphire, principal, is seated in the middle.

An oral history interview from 1965, which covers groundbreaking events in Yeshiva’s history, has been given a new lease on life. The original fragile reel to reel audio tape was professionally transferred to digital format, thanks to a New York State preservation grant. Please listen to a selection of the recording below (or click this link).

The interviewee: Dr. Shelley Ray Saphire, second principal of the high school, whose association with Yeshiva began in 1916 when he was asked to substitute as a biology teacher in the new high school. By 1965, when this interview was conducted, Saphire had been connected with Yeshiva for almost half a century, and had served in many positions, including Dean of Yeshiva College.

In the interview, Saphire discusses the early days of the high school and his role in the development of Yeshiva College and its curriculum, among other topics. Saphire wrote a history of the high school for its tenth anniversary, which appeared in the Elchanite yearbook in 1927 – there are slight discrepancies in some of the dates and it includes more information – you may read it here.

The interviewer: Dr. Hyman Grinstein, author of The Rise of the Jewish Community of New York, and a Yeshiva University professor of American Jewish history, affiliated with Yeshiva starting in 1917 when he was secretary to Dr. Bernard Revel.

This fifty year-old recording of two Yeshiva administrators and educators takes us back yet another fifty years, a form of virtual time travel totaling a century, to the beginning of Rabbi Dr. Bernard Revel’s presidency and the founding of the Talmudical Academy, the first Jewish high school in America to offer a curriculum of Jewish and secular studies, and a New York State Regents diploma.

A 1916 advertisement for the school and a 1919 certificate for its attaining “senior status” may be seen below.

The Yeshiva University High School for Boys / Marsha Stern Talmudical Academy will be celebrating its centennial in the near future. 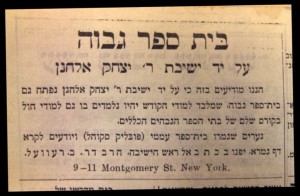 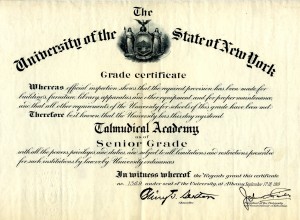