Matan Torah: A vision in Amsterdam, 1723 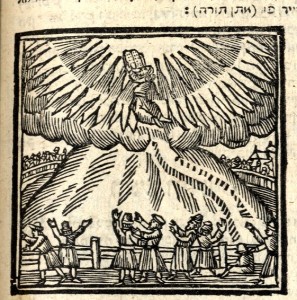 Minhagim books, concise compendia of Jewish laws and customs, emerged as a literary genre in the 1600s. Designed for a popular audience, many of them were written in Yiddish, the vernacular of much of Ashkenazic Jewry. Some editions included illustrations for specific holidays. One such volume, housed in the Library’s rare book room, published in Amsterdam 1723, includes a woodcut depicting the Israelites receiving the Ten Commandments on Shavuot. The artist was presumably influenced by his surroundings; the event appears to be taking place in a Dutch village rather than the Sinai desert, perhaps a reflection of the rabbinic injunction that each Jew should feel as though they personally were present at Mt. Sinai when the Torah was given. 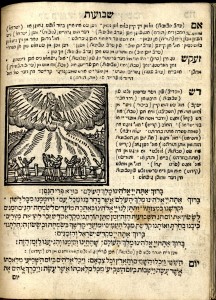