Matan Torah: A vision in Amsterdam, 1723 The Streets Were Paved With Gold: The Gold Medal Flour Yiddish Cookbook of 1921 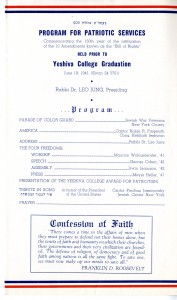 Did you know that in 1941, 75 years ago, the Yeshiva College (YC) commencement took place in June, in Lamport Auditorium, rather than in May at a large venue, as has now been the custom for many years? The 1941 commencement marked the 10th annual YC commencement. It was the first to take place after the death of Rabbi Dr. Bernard Revel, revered President and Rosh Yeshiva, who died on December 2, 1940 at age 55. The 1941 graduation was a tribute to Revel and featured a eulogy for Revel by Dr. Pinkhos Churgin.

The 1941 commencement was also noteworthy for the “Program for Patriotic Services,” held immediately prior to the graduation – an event celebrating the 150th anniversary of the ratification of the Bill of Rights. The Bill of Rights, the first ten amendments of the Constitution of the United States, was ratified on December 15, 1791. The YC event was part of a larger effort in the United States which culminated in President Franklin D. Roosevelt’s designation of December 15, 1941 as “Bill of Rights Day.” The YC assembly featured an address on the Bill of Rights by Rabbi Dr. Leo Jung and four talks by YC students on the four freedoms: worship, speech, assembly, and press.

The flyer which accompanied the “Program for Patriotic Services,” includes an item entitled “Presentation of the Yeshiva College Award for Patriotism” on the program, but does not elaborate on the award, nor state the name of the awardee. Documentation in the Yeshiva University Archives indicates that the “Yeshiva College Award for Patriotism” was actually the Mordecai Ben David Award, bestowed for the first time in 1941 “to the graduate of Yeshiva College who … has encouraged and promoted American patriotism among the Jews of this country.” The recipient of the inaugural prize in 1941 was Joseph Kaminetsky, a member of Yeshiva College’s first graduating class of 1932, “who has invested considerable spiritual energies for the promotion of that type of patriotism among Jewish and non-Jewish students, and especially to the adolescents throughout the United States of America.” Joseph Kaminetsky later became the director of Torah U’Mesorah, the National Association for Hebrew Day Schools, and was responsible for much of the growth of Orthodox Jewish day schools in the United States.

The Mordecai Ben David award is still awarded by Yeshiva University. Its scope has broadened – recipients do not have to be YC graduates. The award is named for the Hebrew name of its founder, Enrico Garda, who was the Ambassador from San Marino to France under Mussolini. In 1940 Garda relocated to New York and was befriended by Rabbi Leo Jung. Thanks to an appeal by Rabbi Jung, Garda donated $50,000 to YC in 1940 – a sum which helped rescue YC’s building from foreclosure. Garda’s one request in exchange for the donation was the establishment of the Mordecai Ben David award.