The Streets Were Paved With Gold: The Gold Medal Flour Yiddish Cookbook of 1921 Hedi Steinberg Library Periodical Room Under Renovation 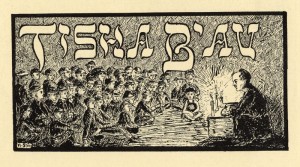 Do you have fond memories of summer camp? Jewish summer camps for youth, which billed themselves as American camps with a Jewish spirit, started to become popular in the 1920s.  Yeshiva University Archives holds numerous brochures, publicity materials, and camp publications from the 1920s and 1930s thanks to the pioneering involvement of two of its faculty members, Jacob Hartstein and Abraham Hurwitz, in Jewish camps.

The Mohaph Mirror: Reflections of Camp Life (1924) includes the illustration of Tisha B’Av in camp, featured above. An accompanying article, “Jewish Life in Camp Mohaph,” provides the following illuminating description of the Tisha B’Av evening services:

“The observance of the eve of Tisha B’av was indeed beautiful and traditional. Seated on the floor, campers and councellors [sic] recalled the periodic exiles which began with the first and second destruction of the Temple. Uncle Hal Koppelman, in his characteristic way, held his audience spell bound by his dramatic narration of the history of Tisha B’av.  Then Uncle Bernie interpreted the history of Tisha B’av, past and present. He pointed out the significance of the dispersion of our people, and what is the modern condition of the Jew. And as a fitting climax to the evening Cantor Kantor chanted the Kinos. A word of praise is in order for the Hebrew group which was led by our very able Hersh Stein.”

“A word of commendation must be written for the councillors [sic] who helped instill a sense of love for Jewish life and Jewish services.”

This description of Tisha B’av explains the nature of the camp in contrast to school – a more personal, all-encompassing experience – and one reason camp is viewed as a powerful and formative Jewish educational rite of passage.  Summer camp forms an extended family, and Tisha B’Av observance in camp teaches campers that they also belong to a larger Jewish family.