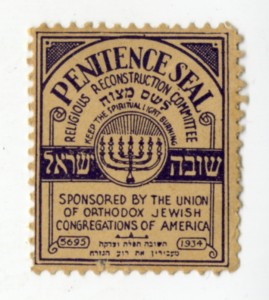 The Union of Orthodox Jewish Congregations of America issued this striking seal in July 1934 as part of the activity of its Religious Reconstruction [Fund] Committee.  One of these rare seals was recently acquired by the Yeshiva University Archives.

The Religious Reconstruction Fund Committee was formed by the Orthodox Union in October 1933 at Kehilath Jeshurun in New York. Rabbi Moses S. Margolies (the Ramaz) and Rabbi Herbert S. Goldstein, chairman of the Religious Reconstruction Fund Committee, explained that the Committee planned to “foster a religious revival and reconstruction of the religious institutions and religious life in America.” It would raise funds to assist congregations, Talmud Torahs, and yeshivas which were suffering because of the economic depression. The funding would also help support the Hebrew Teachers Training School for Girls, an institution which later became the Teachers Institute for Women, and was eventually absorbed into Stern College in 1983.

A groundbreaking activity sponsored by the Committee was a national radio show on Purim night, March 1, 1934.  The program included music and addresses by leaders of Orthodox Jewry and was broadcast over station WJZ’s coast to coast network.  The article announcing the radio show explained that “the Orthodox Union has attempted the task of spiritual rehabilitation in the United States, following the example of the Government which is engaged in the task of physical and economic rehabilitation.” A message from President Roosevelt was read during the broadcast from Washington by Congressman Sol Bloom, Honorary Secretary of the Religious Reconstruction Fund Committee.

The “Penitence Seal” premiered on a subsequent radio program on July 26, 1934. Rabbi Alexander S. Rosenberg, chair of the Committee at the time, explained the purpose of the seal: “In these trying times when everyone’s soul is being tested to the limit, the existence of a closer spiritual union with God will bring with it a deeper sympathy for our fellow men so necessary at this time when we must all join together for a common goal.” He called for “every Jew and Jewess in America to use this seal on all their letters and other mail from August 9th until after the holidays [Rosh HaShanah, Yom Kipur, and Sukkot] so that the message of this solemn period of Penitence may be carried into every Jewish home and into every Jewish heart throughout the land.” The seals were presumably distributed to donors to the Religious Reconstruction Fund Committee.

The motto on the seal, “Keep the Spiritual Light Burning,” is inscribed above a lit seven-branch menorah. The Orthodox Union did not explain the how it came to choose light and the menorah as symbols for the period of repentance.  There are, of course, many possible explanations. Perhaps it is a reference to Rabbi Isaac Kook’s Orot He-Teshuvah, Lights of Repentance, first published in 1925, or a beacon of light during the dark days of the Great Depression.

Although the Religious Reconstruction Fund Committee was a short-lived effort, its seal, a tangible token of a charitable donation, lives on, and its message still resonates.