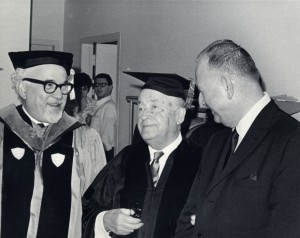 On Monday October 31, the Yeshiva University Center for Israel Studies is holding a conference celebrating the 50th anniversary of S.Y. Agnon’s receipt of the Nobel Prize for Literature in 1966. In Stockholm at the Nobel awards ceremony, a scroll from Yeshiva University was presented to Agnon, “in recognition of Mr. Agnon’s contributions to the art of writing, to the prestige of Israeli and Jewish culture, and to the Hebrew language.” Dr. Elazar Hurvitz, formerly Agnon’s secretary and then a professor at Revel, was present at the occasion.  The scroll was signed by Dr. Samuel Belkin, President of YU at the time.

Belkin and Agnon met in person the following year at YU when Agnon was awarded an honorary Doctor of Hebrew Letters degree in June 1967.  The doctorate was scheduled to be presented at Commencement on June 12, but the outbreak of what would become known as the Six-Day War on June 5 changed the plans.  Agnon wanted to return to Israel as soon as possible, so YU rushed to organize a special convocation on June 7 to bestow the honorary degree. The last-minute invitation stated that “the ceremony, honoring one of Israel’s most distinguished citizens, represents a unique opportunity for the entire University family to express its support and solidarity for the State of Israel in its hour of crisis.” With little notice, 1000 people attended the event in Lamport Auditorium. The date on the Hebrew calendar was 28 Iyar, and the charged atmosphere of the war and the battle for Jerusalem are evident in these audio recordings of Belkin’s and Agnon’s remarks, held by Yeshiva University Archives. 28 Iyar is, of course, now celebrated as Jerusalem Day, Yom Yerushalayim.

Please join the Center for Israel Studies at the conference in 535 Furst Hall on Monday, October 31, to delve into Agnon’s Stories of the Land of Israel. 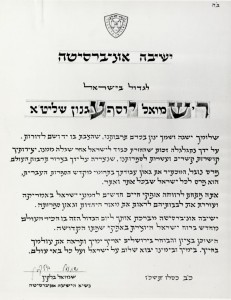