May She Vote? Jewish Women’s Suffrage in British Mandatory Palestine 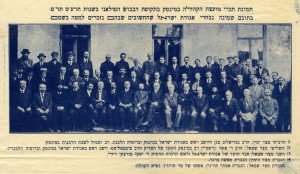 The nomination of the first female presidential candidate of a major American political party is a time to reflect on the history of women and the vote.  At the very same time the campaign for women’s voting rights was taking center stage in the United States, a similar debate was taking place in the Jewish community, the Yishuv, in British Mandatory Palestine. Under British rule, the Yishuv was permitted to “operate national style-institutions,” … under a self-governing political structure, known as Knesset Yisrael.

An issue which came to the fore in the elections for Knesset Yisrael was the question of women’s right to vote. Many in the religious community, including Rabbi Abraham Isaac Kook, the Ashkenazi Chief Rabbi of Palestine, were opposed to women’s suffrage.  Yeshiva University Archives holds a number of posters related to the issue, including the one depicted here, which cites Jewish communal elections in Minsk in 1920, when Agudath Israel encouraged women to vote, as a historical and religious precedent for women’s right to vote.

The subject of women and the vote in pre-state Israel is examined in a book by Margalit Shiloh, recently translated into English, Zionist women’s struggle for suffrage in mandatory Palestine, 1917-1926, for those who would like to delve further into the topic.