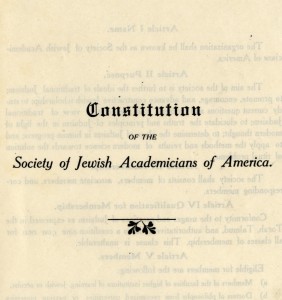 Today academic Jewish studies programs as well as associations of Jewish academics flourish in the United States. The situation was far different a century ago, when Rabbi Dr. Bernard Revel, president of the Rabbi Isaac Elchanan Theological Seminary, founded the Society of Jewish Academicians of America. The Society’s Constitution, recently acquired by the Mendel Gottesman Library, states that “the aim of the society is to further the ideals of traditional Judaism; to promote, encourage, and advance constructive Jewish scholarship; to study current questions and problems from the point of view of traditional Judaism; to elucidate the truth and principles of Judaism in the light of modern thought; to determine the place of Judaism in human progress; and to apply the methods and results of modern science towards the solution of ritual problems.”

The Society existed until 1923, but never became a force in American Jewish scholarship.   Indeed, it was resented and ridiculed by Jewish academics in other institutions, though it may have served as a catalyst for the formation of the Association of Jewish Scholars in America, founded in 1920, still in existence today as the American Academy for Jewish Research. For further information on the Society, see Ira Robinson’s “Cyrus Adler, Bernard Revel and the Prehistory of Organized Jewish Scholarship in the United States,” in American Jewish History, vol. 69, no. 4 (June 1980), pp. 497-505. 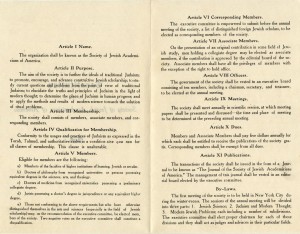