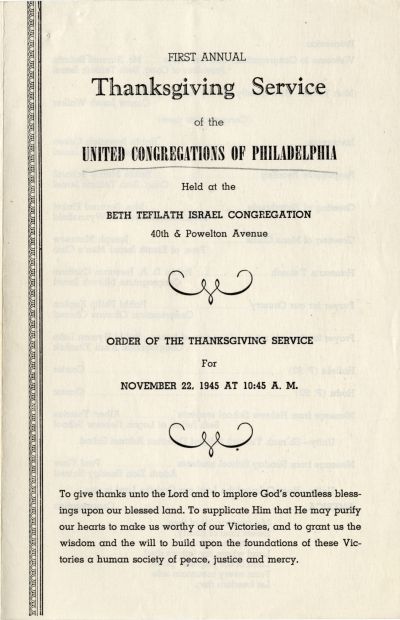 Thanksgiving 1945, the first Thanksgiving after the end of World War II,  was a time for  the free world in general, and Jews in particular, to give thanks for the Allied victory in World War II.  A variety of synagogues in Philadelphia united to organize the “First Annual Thanksgiving Service of the United Congregations of Philadelphia … To give thanks unto the Lord and to implore God’s countless blessings upon our blessed land. To supplicate Him that He may purify our hearts to make us worthy of our Victories, and to grant us the wisdom and the will to build upon the foundations of these Victories a human society of peace, justice and mercy.”  The program for the event is held by the Yeshiva University Archives.

The featured speaker at the Thanksgiving service was Chaplain Herschel Schacter, Captain in the United States Army (though his name is misspelled on the program as “Hershel Schechter”).  Rabbi Schacter was the first Jewish chaplain to enter the Buchenwald Concentration camp, after advancing through Germany with the American infantry.  He organized the liberated concentration camp survivors as “the Jewish Committee of Buchenwald, which became the first post-Hitler Jewish organization on German soil.”  This speech in Philadelphia may well have been one of the first he delivered after WWII, and the beginning of his career as a storied speaker and witness to the Holocaust.  Rabbi Schacter, a graduate of Yeshiva College (1938), received semikhah from the Rabbi Isaac Elchanan Theological Seminary (1941) and went on to a distinguished career both in the rabbinate and in Jewish communal work.  He received an honorary Doctor of Divinity degree from Yeshiva University in 1972.  A brochure in the Archives from the era of the Hungarian Revolution, ca. 1956, provides a glimpse of Rabbi Schacter’s activities on behalf of Jews and Judaism, freedom, and democracy.

His son, Rabbi Dr. Jacob J. Schacter, is University Professor of Jewish History and Jewish Thought at YU in addition to serving as Senior Scholar at the Center for the Jewish Future. 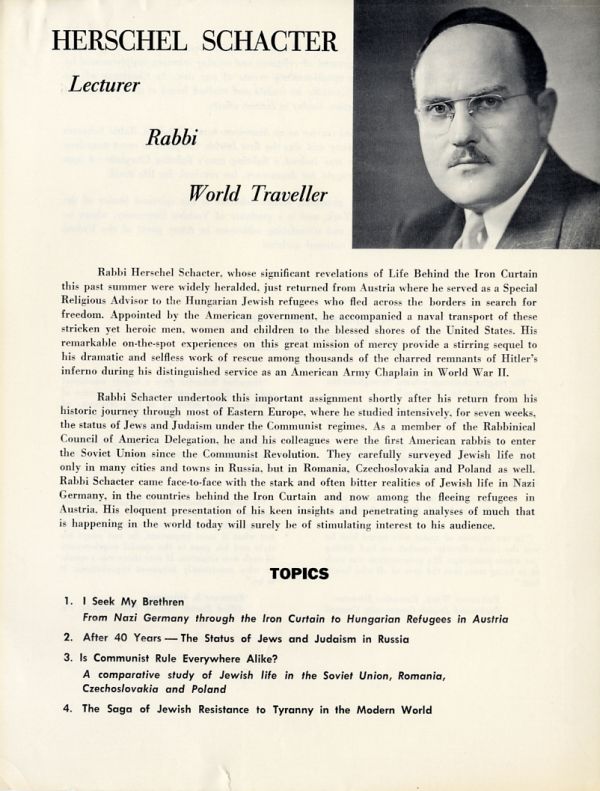