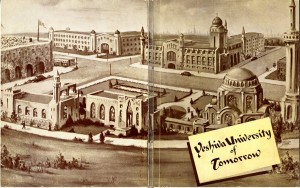 Yeshiva’s first Hanukkah dinner took place over a century ago in 1915, in honor of the dedication of Yeshiva’s new home in a small refurbished building on Montgomery Street on New York’s Lower East Side.  Yeshiva has a long history of Dining for the Divine on Hanukkah; a festivity of fellowship, food, and fund-raising.

Yeshiva’s elevation in status, from a college in 1928 to a full-fledged university in November 1945, achieved under Dr. Samuel Belkin’s visionary leadership, was marked by a new type of dinner format, the Charter Day dinner, named in honor of the University’s new Charter.  Dr. Belkin’s words upon Yeshiva’s attaining University status are worth quoting: “We are now privileged, together, to be the pioneers in the creation of a Jewish university. What the Yeshiva represented in 1896, however, is one with what Yeshiva University represents in 1946: an endeavor to meet the increasingly complex spiritual, moral, and intellectual needs of the American Jewish community, and to enable our youth in increasingly full measure to contribute to American life. … We, whom your aid implements and inspirits, pledge our devoted efforts, with the help of the Almighty, that Yeshiva University, now created by our amended charter, may grow as an ever more effective force for individual and general betterment, throughout the Jewish and the entire American community.” 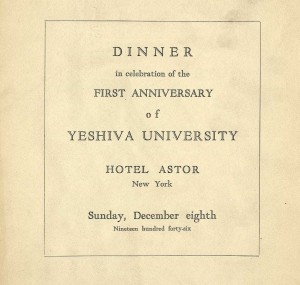 The Charter Day dinner became an annual event, commencing in 1946, when the newly minted University celebrated its first anniversary.  The tradition continued until 1958 and honorees included notables such as John F. Kennedy, who received the University Award at the 1957 Charter Day Dinner.  The Charter Day dinner and the Hanukkah dinner seem to have joined forces and united to become one event after 1958, presumably since both events occurred at the same time of year.   Seventy years after the first Charter Day dinner on December 8, 1946, the tradition continues; this year’s Hanukkah dinner will take place on December 11, 2016. 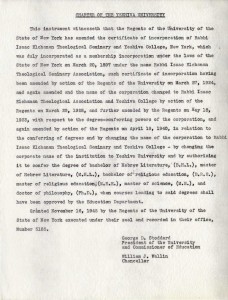