The Jews of Harlem 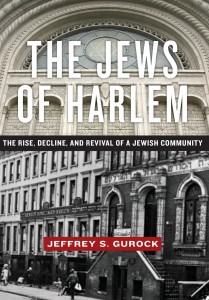 The Jews of Harlem : The Rise, Decline and Revival of a Jewish Community, by Jeffrey S. Gurock. New York University Press, 2016.

Professor Gurock’s new book returns to a subject he first dealt with in his first book, published 37 years ago (When Harlem was Jewish, 1870-1930). In it, he traces, recounts and analyzes the fortunes of the Jewish communal presence in Harlem. It is an area which was home to 175,000 Jews in the early 20th century, who worshipped in some of the largest and most magnificent synagogues, which today form the principal physical evidence of their former presence. Quite soon after reaching the apogee of their number, Jews began in the 1920’s to scatter to other parts of the city and beyond. The dynamic processes of this ebb and flow form the subject of this new book. The author carefully unpacks the forces whose interplay shaped these processes. He describes the relations between the earlier center of Jewish life in lower Manhattan and the one in Harlem, as well as the relations between Harlem Jews and the African-Americans who began to move there in large numbers beginning with WWI. A remarkable aspect of the complex history, so well presented in Prof. Gurock’s book, is its dynamic chiaroscuro quality, emblematic of much in urban American Jewish history: communities form with great energy and verve, only to disperse within a generation or two, leaving on the surface the testimony of the physical structures erected with great effort and enthusiasm. Prof. Gurock draws on a wide field of documentary evidence to recall the varied life of this once vibrant community and lays before the reader the multiple currents on which it sailed and which, in turn, buffeted it. Anyone with an interest in the history of New York City and, more specifically, its Jewish component, will relish reading this book.