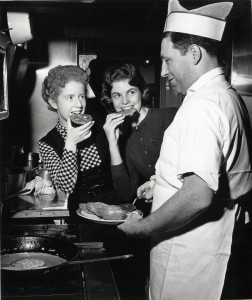 Hanukah, the Festival of Lights and Latkes, was celebrated by students at Yeshiva and Stern with the traditional crispy potato delicacy flying hot off the frying pan in Mr. Parker’s kitchen. 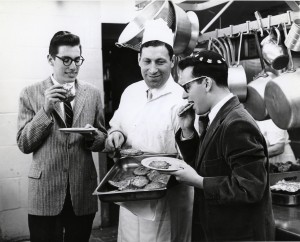 In the days when kosher restaurants and dining were limited and the YU cafeteria, known as “Parker’s,” was a destination, particularly noted for its Thanksgiving fare, Alfred Parker presided over the cafeteria. A one-man powerhouse, a gentleman and gifted chef, whose philosophy of cooking was “80% love and 20% courage,” he worked fourteen hour days and drove 300 miles a week to oversee the preparation of thousands of kosher meals in dairy and meat kitchens on the Main, Midtown, and Medical School campuses.

Alfred Parker was born in Vienna in 1919.   He was an engineering student in Austria, but fled to Switzerland at the time of the Anschluss in 1938. In Switzerland, he lived in a refugee camp where he helped in the kitchen and learned to cook. He received a chef’s diploma at the hotel management school in Lucerne in 1945, arrived in the United States in 1947, and started working at Yeshiva University in 1957. According to a YU press release, “Mr. Parker brought professional flair to traditional Jewish cooking, adapting and revising University menus to accommodate changing culinary patterns.”

During Yeshiva University’s 75th anniversary year (1960-1961), the Public Relations Department made a special effort to publicize the University through stories of traditional Jewish food. Mr. Parker was featured at Hanukah time, together with his latke recipe, in food columns in general interest newspapers across the United States, from Racine, WI to Gloversville, NY.

Mr. Parker was more than just another YU employee; he was a mensch, and served as a role model and mentor to students. He made sure that students in need had enough to eat by offering them jobs as waiters. Despite his busy schedule, he taught non-credit cooking courses at Stern College in the 1960s, encouraged by students who frequently sought his advice. Once, when a Stern student called Mr. Parker in 1965 and asked, “I have company and my turkey doesn’t smell so good. What shall I do?” he solved the problem by supplying five portions of turkey from the school cafeteria menu. He retired in 1987; the invitation for his retirement party noted: “he will long be remembered in many hearts and stomachs.” Mr. Parker, a long-time resident of Washington Heights, died in 2003.