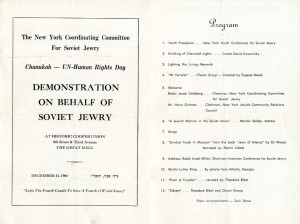 Rev. Dr. Martin Luther King, Jr. addressed 50,000 people in thirty-two states at demonstrations for Soviet Jewry all across the United States via a national telephone hook-up. The date was December 11, 1966 – United Nations Human Rights Day, which coincided with Chanukah that year. King was invited to speak by Rabbi Dr. Israel Miller, Chair of the American Jewish Conference on Soviet Jewry, and later Senior Vice-President of Yeshiva University. Miller’s letter to King is at the King Center. Miller explained that December 11 was selected since it was the weekend of “… the eighteenth anniversary of the adoption of the Universal Declaration of Human Rights [which the Soviet Union had signed] and falls during the week of Chanukah, the Festival of Lights which commemorates the struggle for religious freedom.”  An audio recording of King’s stirring remarks on behalf of Soviet Jewry is available in the Yeshiva University Archives. He announced that “We cannot sit complacently by the wayside while our Jewish brothers in the Soviet Union face the possible extinction of their cultural and spiritual life.  Those that sit at rest, while others take pains, are tender turtles and buy their quiet with disgrace.”  He proclaimed: “The denial of human rights anywhere is a threat to the affirmation of human rights everywhere,” and further decreed that “Jewish history and culture are a part of everyone’s heritage, whether he be Jewish, Christian or Moslem.” 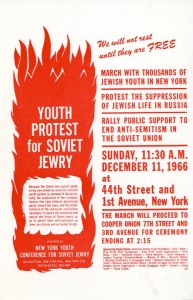 The audio recording and a transcript of King’s remarks are in the Student Struggle for Soviet Jewry Collection, which was donated to the Archives by Jacob Birnbaum, founder of the Student Struggle for Soviet Jewry, who was coincidentally born on what eventually came to be Human Rights Day, on December 10 [1926]. Martin Luther King was tragically assassinated on April 4, 1968; he was born on January 15, 1929, and the United States instituted a Federal holiday, Martin Luther King Day, in his honor.