The recent Presidential inauguration has sparked curiosity regarding the relationships of our nation’s Chief Executives with Yeshiva University during the course of our institution’s history. Below is a selection of interesting findings from the collections of Yeshiva University Archives:

The earliest correspondence with a U.S. President dates back to 1927 in a letter from President Calvin Coolidge to Yeshiva’s Dr. Bernard Revel. The letter conveys Coolidge’s regrets at not being able to attend the cornerstone laying of what became Zysman Hall, a significant milestone in Yeshiva’s relocation from the Lower East Side to Washington Heights. The President acknowledges the importance of the event in Yeshiva’s development and the institution’s role in “…culture, learning, scholarship, and for religious training so vitally essential to the welfare of our country.”

Revel again reached out to a Presidential incumbent in 1936, in a letter expressing the desire to present an Honorary Degree to President Franklin Roosevelt at Yeshiva College’s Commencement Exercises and marking the institution’s Jubilee Anniversary. This did not take place (no reply was found in the Archives), and it would be a jubilee’s worth of additional years before a sitting president would be honored by the University.

In the interim, however, YU honored several future United States Presidents. These were Richard Nixon (1957), Lyndon Johnson (1961), and George H.W. Bush (1985), all of whom were granted honorary degrees while they were sitting Vice-Presidents, and John F. Kennedy, while he was a U.S. Senator. Kennedy was honored twice by YU, in 1955 in celebration of AECOM’s opening, and in 1957 at YU’s Charter Day Dinner.

A high-water mark of YU’s Presidential connections took place in 1986 when President Ronald Reagan was granted an honorary degree at a special event held in the White House Oval Office as part of the University’s Centennial Anniversary celebration. Reagan acknowledged YU’s significant history and traditions, noting that “…representing as it does both freedom of secular inquiry and freedom of religion, it is the story of America.” 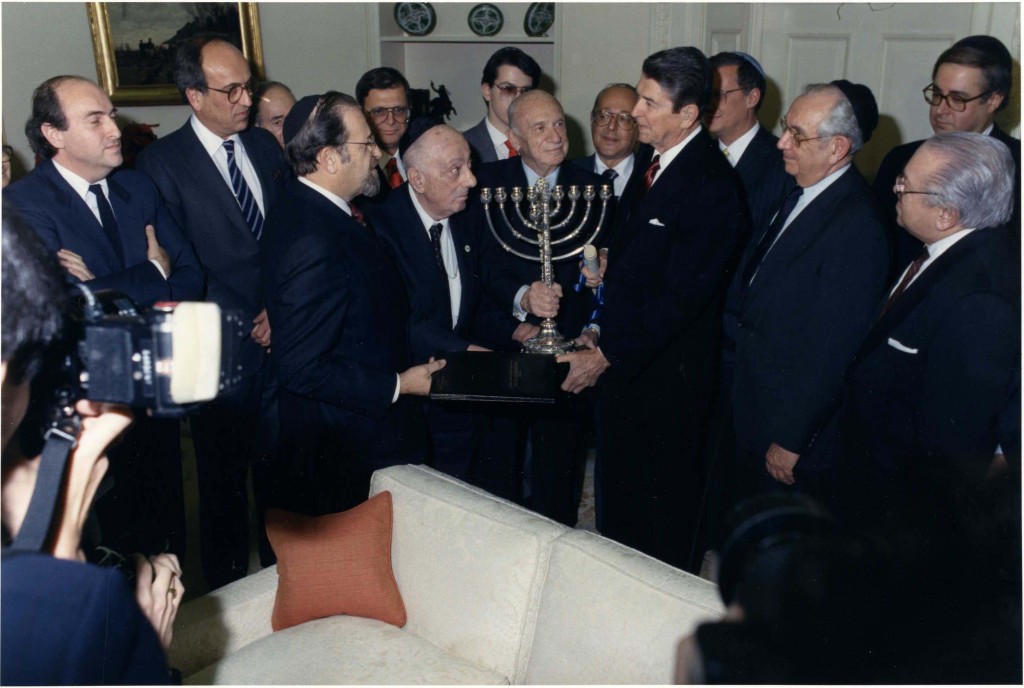 Being awarded an honorary degree has led to more lengthy affiliations with the University by Presidential recipients and their families in several cases. President Kennedy’s brothers Robert and Edward both received honorary degrees from YU, in 1967 and 1973 respectively, and in 1965, the family’s foundation established a Center at AECOM for research into mental retardation and human development, the present Rose F. Kennedy Intellectual and Developmental Disabilities Research Center.

More about the Kennedy family’s relationship with Yeshiva University may be found here.

A relationship was also forged with President Lyndon Johnson. While in office, Johnson recorded a video message to be shown at a 1964 dinner honoring radio and television broadcasting pioneer David Sarnoff that launched the Belfer Graduate School of Science’s 15 million dollar campaign to build a Science Center (the origins of the Wilf Campus’ Belfer Hall). Johnson also invited YU President Samuel Belkin to attend the opening of his Presidential Library in 1971, writing that he regarded being awarded a YU honorary degree as among ”…the proudest moments I experienced in my lifetime.” (Belkin responded that only “the most compelling commitments” prevented him from attending, explaining that the event “falls on our Sabbath”.)

Several former Presidents have been honored at YU, some of which were at student versus official University events. Two years ago, George W. Bush received an honorary degree at the University’s 90th Hanukkah Dinner and Convocation. In 2001, former President Bill Clinton received the International Advocate for Peace award, which is conferred by two student groups of YU’s Cardozo School of Law – the International Law Students Association and the student-run Journal of Conflict Resolution. The same award was given to former President Jimmy Carter in 2013.

The absence of any relationship can be just as striking as the existence of one. For example, no connection with President Harry Truman was discovered from this high-level survey of archival records, which is surprising given American Jewry’s lasting gratitude for his immediate recognition of the newly established State of Israel in 1948. However, more extensive research would be needed to be certain that no exchanges exist or overtures were made, either during Truman’s incumbency or during the two decades after he left office until his death in 1972. Another interesting area to explore is whether any connections were made between Franklin Roosevelt and YU leadership during the four years that Roosevelt served as Governor of New York (1928-1932), key years in YU’s history when it celebrated many major milestones, including the relocation to Washington Heights, the establishment of Yeshiva College, and its first Commencement Exercises.

To be continued in a future posting……