Haggai, Zechariah, and Malachi Ghosts of Purim Past 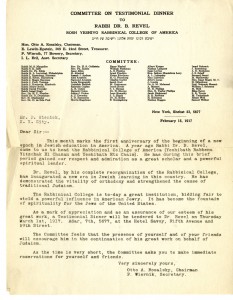 A century ago marked “the first anniversary of the beginning of a new epoch in Jewish education in America.” Rabbi Dr. Bernard Revel had assumed the presidency of the Rabbinical College (Rabbi Isaac Elchanan Theological Seminary – RIETS) a year earlier, and re-organized it, breathing new life into Judaism in the United States.  According to the dinner invitation, Revel had “inaugurated a new era of Jewish learning in this country. He has demonstrated the vitality of orthodoxy and strengthened the cause of traditional Judaism. … The Rabbinical College has become the fountain of spirituality for the Jews of the United States.” 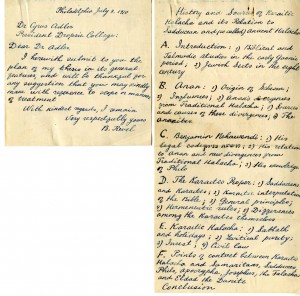 Revel, a pioneering figure, was described in the invitation as a “great scholar and a powerful spiritual leader.” Revel’s scholarly credentials are worthy of note at this time, since the Yeshiva University Archives recently received a unique gift from Joel L. Spector: the original proposal Revel sent to Dr. Cyrus Adler of Dropsie College for his doctoral thesis on the “History and Sources of Karaite Halacha and its Relation to Sadducean and (so-called) Ancient Halacha.” The letter is dated July 8, 1910; the thesis was submitted on February 27, 1911. The dissertation was published in 1913 under the title The Karaite Halakah and its Relation to Sadducean, Samaritan and Philonian Halakah.  Bernard Revel was the first person to receive a doctorate from Dropsie College. Armed with his doctorate, his semicha from rabbis in Eastern Europe, the imprimatur of Rabbi Moses Zevulun Margolies (the Ramaz), and his native talents, Revel was poised to be the leader of an institution that would be at the forefront of Jewish study, scholarship, and religion in the United States.

The words in the dinner invitation of 1917 proved prophetic: “The Rabbinical College is to-day a great institution, bidding fair to wield a powerful influence in American Jewry.” A century later, on March 19, 2017, RIETS will be ordaining more than 130 new rabbis (musmachim), a number which would have been unimaginable to Revel in 1917. 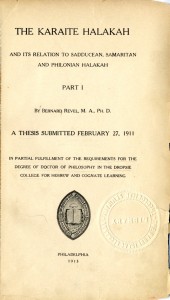