Celebration of University Authors on May 4, 2017 Semikhah Centennial

Saving One’s Own: Jewish Rescuers During the Holocaust 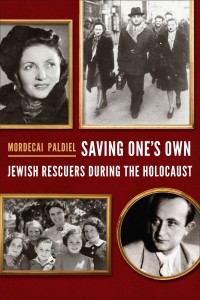 Mordecai Paldiel – Adjunct Professor in Jewish History, Stern College for Women – has created a welcome and vital addition to Holocaust scholarship. Saving One’s Own: Jewish Rescuers during the Holocaust debunks the myth of Jewish passivity during this era, as well as the assumption that the rescuers were largely comprised of either Righteous Gentiles or Allied forces. Sharing testimonies of rescuers and extensive historical background, Prof. Paldiel documents the networks, partisan groups, escape routes, and safe havens – all built and run by Jewish activists in order to provide aid and shelter, often at great risk to their own lives. Thanks to their courage and inventiveness, thousands of their brethren survived. Saving One’s Own ably addresses the assumption of communal helplessness by showing how caring and concerned Jews boldly took control of their destinies and also shaped the events of World War II.