The Menorah: From the Bible to Modern Israel Catalog of University Authors

Today, a consumer shopping for kosher for Passover products enjoys choosing from a myriad of prepared, packaged, and frozen foods. Supermarket shelves overflowing with wares offer a selection of 52,000 kosher for Passover foods, according to the newsletter KosherToday. 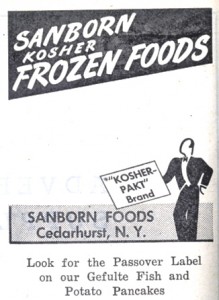 In 1947, seventy years ago, the nascent kosher food market proudly proffered two frozen foods certified kosher for Passover by the Orthodox Union.  The two products were “Gefulte Fish” and “Potato Pancakes,” produced by Sanborn Foods of Cedarhurst, NY, an enterprise founded by Samuel Borenstein in 1945. The RCA Bulletin, the official organ of the Rabbinical Council of America, announced the new items in April 1947, and referred to an article showcasing them in the New York Times “News of Food” column (March 19, 1947).  Under the title “Frozen Kosher Foods Appear on Market” the article declared that the kosher market is “rapidly expanding to include almost everything which is edible” and extolled the “first kosher products to enter the frozen food field,” praising the taste of the gefulte fish, a “Jewish delicacy … pleasantly flavored with celery, onions, carrots and other seasonings,” and noting that the potato pancakes “are all ready to be heated, either in the oven or on top of the stove.”  The frozen fare was marketed under the name “Sanborn’s Kosher-Pakt.” Sanborn’s is apparently the progenitor of Borenstein Caterers, currently a subsidiary of El Al, which feeds hundreds of passengers while it flies them to Israel to celebrate Passover every year. 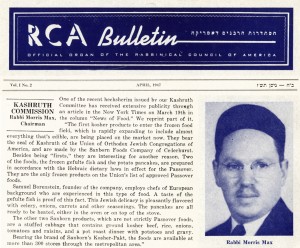 RCA Bulletin, collage created from issues of February 1947 and April 1947.