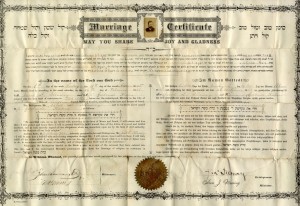 Have you ever seen a marriage certificate in Aramaic, English, and German – in several different scripts and typefaces? To mark the holiday of Tu B’Av, the ancient holiday when unmarried women danced in the vineyards hoping to find their mates, it seems fitting to feature a ketubah from Yeshiva University’s archival collections.

Jacob Illoway, a native of Syracuse, New York, traveled frequently for his business as a cigar manufacturer. He went west to San Francisco where he met and wed Gertrude Kahn, originally of Salt Lake City, Utah. This ketubah solemnizes their marriage in 1888. The officiant at the wedding was Rabbi Aron J. Messing, of Congregation Beth Israel, one of the only Orthodox rabbis in San Francisco at the time. The certificate has Messing’s name printed on it, and his photograph appears at the top. The Aramaic is a traditional ketubah; the English and German texts include pronouncements on marriage and the relationship and responsibilities of both partners rather than a literal translation of the text of the ketubah.

Jacob Illoway was the son of Rabbi Bernard Illowy, one of the early prominent Orthodox rabbis in the United States. Rabbis Illowy and Messing had much in common. Both men were rabbis from Central Europe, who arrived in the United States as part of the German Jewish wave of immigration which came to these shores between 1820 and 1880. They were pioneers of Orthodox Judaism in this country.

Jacob and Gertrude Illoway eventually settled in New York City. Jacob died in 1907, and Gertrude and their children moved to Madison Avenue, to the home of Jacob’s brother, Dr. Henry Illoway. The house still exists and was recently featured, together with some Illoway family history, in a blog post in the Daytonian in Manhattan.

Credits: Yeshiva University Archives would like to thank Kathryn Wallach, great-granddaughter of Rabbi Bernard Illowy for donating his papers, and for providing information about Jacob Illoway and Gertrude Kahn.