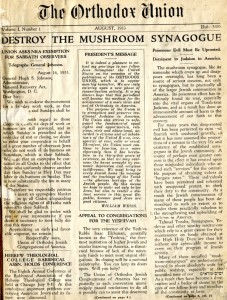 A plague descended on the Jewish community of New York in the 1930s. Although it struck only seasonally and often lay in remission, it nonetheless drained precious life-blood from the community’s limited resources. The spread of the “mushroom synagogues” continued unabated throughout the Great Depression.

The “mushroom synagogues,” transient places of worship which sprang up annually just before Rosh Hashanah only to wither away with the waning of the sound of the shofar at the close of the Yom Kipur, posed a dual danger to the Jewish communities of the 1930s. Many Jewish organizations were skeptical of the spiritual integrity of these makeshift groups. Convocations for purposes of prayer held in chop suey restaurants, dimly lit, poorly ventilated theaters, or dance halls where the sounds of jazz still resonate, “profane the sanctity of our holy days… and encourage disrespect to our faith.” Furthermore, economic considerations posed an immediate threat. The bootleg “services” lured worshippers away from established neighborhood synagogues with offers of bargain-rate tickets.  The inaugural issue of the Orthodox Union (August 1933) addressed the scourge of the mushroom synagogues: ”These temporary houses of worship are a poisonous evil [which] must be uprooted.” A year later, the rhetoric continued in the Orthodox Union’s issue of July 1934: “They menace the existence of true synagogues which rely on revenue from seats for income for the congregation and religious school. …” The proliferation of the “mushroom synagogues” encouraged the new type of “three-day-a-year” and “yahrzeit” Jews, freeing them of the responsibility to support permanent religious institutions. The “…misguided individuals who attend such ‘services’ … have been permitted and tolerated with unopposed protest, to shirk their duty to their community. As a result the Jewish consciousness of many of these people has been demoralized to such an extent as to render them practically valueless to the strengthening and upbuilding of Judaism in America. Attending the regular synagogues “…helps the perpetuation of Judaism and the spread of Hebrew education among the children.”  “Mushroom synagogues” are nothing but “private davening stores” run by “cheap storekeepers” who speculate in religion for their own personal profit. Most concerned parties saw only one solution to the problem: the elimination of these religious “racketeers.” “No honest representative of the Jewish spirit of prayer would prostitute his people’s religious idealism for the gain of gold. And no Jew should dare to seek spiritual elevation at the Godless altar of temples dedicated to the idea of Money-Theism!”

In order to ameliorate this critical situation, the national Federation of Orthodox Congregations embarked on a campaign to eliminate the “mushroom synagogues.” The Federation joined an illustrious roster of Jewish groups such as the Union of Orthodox Jewish Congregations and the United Synagogue in the fight against this menace. A newcomer to the world of Jewish organizations, the Federation was founded at the First National Convention of Jewish Congregations of America, held at Yeshiva College in June 1932. The Federation’s correspondence is housed at the Yeshiva University Archives.  The Federation proposed to “assume the sole leadership of the Orthodox communities and be empowered to act in their name in all Jewish matters, local as well as national.” Among the chief objectives of the Federation, as stated in the report of the founding convention, was the desire to “unite the synagogues in each district in order thereby to improve their own position was well as to enable them to exert a proper influence in all Jewish activities so that they be conducted in the Jewish spirit.”

An obvious threat to the hope of uniting the synagogues was the divisive phenomenon of the rogue “mushroom synagogues.” Therefore, eradicating the “mushroom synagogues” was high on the Federation’s list of priorities, and the campaign against them gathered momentum in the summer of 1932. The Federation placed press releases describing the evils inherent in the “mushroom” situation in prominent Yiddish dailies in New York. As a practical measure, the Federation requested that synagogues make room for all comers for the High Holidays and enable all to pray in accordance with their means, especially in consideration of the economic crisis of the time.

Employing another tactic, the Federation sent letters of protest to owners of the premises that were rented for these “services.” The managers of Jewish institutions in the Bronx were informed that “… religious services in your theatre undermine the very existence of many of the congregations in your section that have benefits in your theatre throughout the year. An institution that derives income from congregations should not be the one to help undermine their only source of income.”

These letters elicited spirited responses from owners who felt justified in holding services on their premises. Jennie Goldstein, proprietor of the Prospect Theatre located on 161st street, declared that the Federation’s description of the situation made “…its abhorrent features … apparent even to me as a woman.” However, she explained, her desire to help the community was the very reason that services were held in the theater. The High Holiday services on her property were conducted by the Bikur Choilem Convalescent Home, a charitable organization, for fundraising purposes. The Bikur Choilem threatened to hold their services in a “hall” if she would not cooperate with the Home, and publicly announce that her theater had refused to help the organization and should be boycotted. Ms. Goldstein suggested that the Federation should direct its complaint to the Bikur Choilem rather than to her, concluding, “So you see, we are damned by them if we don’t, and we are damned by you if we do.”

In response to a similar missive, Bim-Green caterers — managers of the Winter Garden on Washington and Tremont Avenues – counterattacked the Federation’s insinuations. Sol Green vehemently objected to the designation of the premises as a “mushroom synagogue” in a letter dated September 12, 1932. He declared that the Federation was “woefully misinformed” on the matter. Not only was the ballroom where the services were conducted well-lit, perfectly ventilated, and in compliance with Fire and Building Department rules, but he donated a percentage of the High Holiday receipts to a local synagogue and Talmud Torah. Furthermore, he accused the Federation of hypocrisy, charging established synagogues with their own improprieties: “Now as to your claim that we are taking away the sale of tickets from neighborhood synagogues, they are taking away, all year long, business from us to which they have no right, as theirs should be places of worship, instead of being used for dances, wedding receptions, caterings, and other social functions, which are run by men who are charging half of what the prices should be. This they do without need of paying taxes, licenses, etcetera, such as we in our business are obliged to pay. … At every affair in our place we have a Special Officer who sees that no strangers are admitted, so that there is no chance of any but the guests entering, whereas at your places of worship I have witnessed all kinds of people, in fact whoever pass the doors, come in, including Gentiles, and they buy liquor from the Sextons in charge of your synagogues.” [Author’s note: 1932 was during Prohibition]

The arguments of the owners of these institutions highlight some of the flaws in the claims of the anti-mushroom groups. Services held in temporary quarters were not a monolithic group, could not necessarily be lumped together, and were not always organized with self-serving or mercenary intentions. But with respect to one important underlying issue, the group of temporary services did stand on common ground. Perhaps one of the unarticulated complaints of the organized, established Jewish community vis-à-vis the “mushroom synagogues” was the issue of authority in the American Jewish community. The individual “mushroom synagogues” could not be united or integrated into any formal structure, and were regarded as a potential threat to the future of the Jewish community as an organized entity.

Yet even those who regarded themselves as official representatives of the legitimate Jewish community could not agree whose voice should be heeded. The birth of the Federation, an organization which was certainly part and parcel of the authoritative Jewish community, serves to reinforce this analysis of the American Jewish community. By November 1932, only a few months after the Federation was organized, the Federation and the Union of Orthodox Jewish Congregations of America had already conducted meetings to discuss the merger of “…two organizations apparently organized for the same purpose, yet working independently of each other.” Negotiations on the subject of the merger continued through early 1933 but were apparently never concluded. Thus, official Jewish organizations were perhaps guilty of some of the same sins as those committed by the “mushroom synagogues.” Competition, fragmentation, and duplication of efforts existed on a national, official, organizational level as well as in the realm of the local neighborhood and lay community.

Although the Federation became inactive after 1933, the fight against the “mushroom synagogues” continued with unabated vigor on numerous fronts. In July 1934, the Union of Orthodox Jewish Congregations advertised the availability of English and Yiddish “Anti-Mushroom circular ‘Throwaways’” at $3.00 per thousand in its publication, the Orthodox Union. Local and state governments, presumably at the behest of the Jewish community, also jumped on the anti-mushroom bandwagon. Even The New York Times reported on the issue when Bronx D.A. Samuel J. Foley issued a warning against “mushroom synagogues” in July 1934 “in an effort to keep racketeers posing as rabbis from defrauding Jews in the Bronx.” An “anti-mushroom synagogue bill” was introduced in the New York State Legislature as an amendment to the Penal law of New York State, entitled “Frauds on Religious Institutions.” Despite these efforts, neither legislation nor exhortation could truly succeed in a society without religious coercion, where all are free to worship they please.

Today independent High Holiday services of different stripes abound; communal and economic issues similar to those of the 1930s are still debated, though the disparaging term “mushroom synagogue” is no longer in vogue. Both autonomous services and established synagogues coexist, and the interplay between them has served to enrich both. The age of the “mushroom synagogue” passed as the nature of synagogue attendance and synagogue structure changed. Large, established synagogues adopted practical measure akin to those suggested by the Federation. They began to hold multiple services on their premises rather than just one main service. These services catered to various needs, including those of non-members, and offered tickets at a range of prices. Perhaps in a society based on free enterprise, synagogues realized that they too must learn the skills of adaptation and competition in order to thrive.

Originally published in Hamevaser, January 1992. The current piece has been edited slightly from the original.