Mendel Gottesman’s Yahrzeit – the 75th Anniversary of His Death 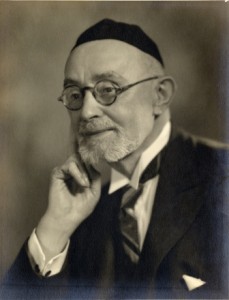 The Mendel Gottesman Library commemorates the 75th yahrzeit, or anniversary, of the death of Mendel Gottesman, which took place on December 16, 1942. A portrait of Mr. Gottesman hangs on the wall of the newly renovated fifth floor of the Mendel Gottesman Library. The Library was named for Mendel Gottesman in 1937, eighty years ago, when it was located in Zysman Hall. Mendel Gottesman never saw the current library building. The plaque in his honor was moved from the library in Zysman Hall to the 5th floor of the current library building when it was built in 1968. Mr. Gottesman was a major benefactor of the Yeshiva [the Rabbi Isaac Elchanan Theological Seminary] and Yeshiva College, serving as treasurer from 1919 until 1942, and he was the founder of the Yeshiva Endowment Foundation in 1928, serving as its president until1942.  He had a special interest in the library, “effecting improvements in lighting and fixtures and helping to maintain its financial support.” An editorial in the Commentator stated:  “His life was Yeshiva, and Yeshiva was his life.” May his memory be blessed. יהי זכרו ברוך. 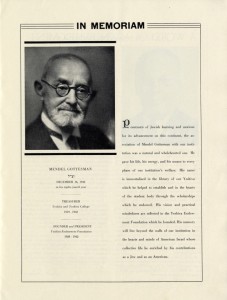