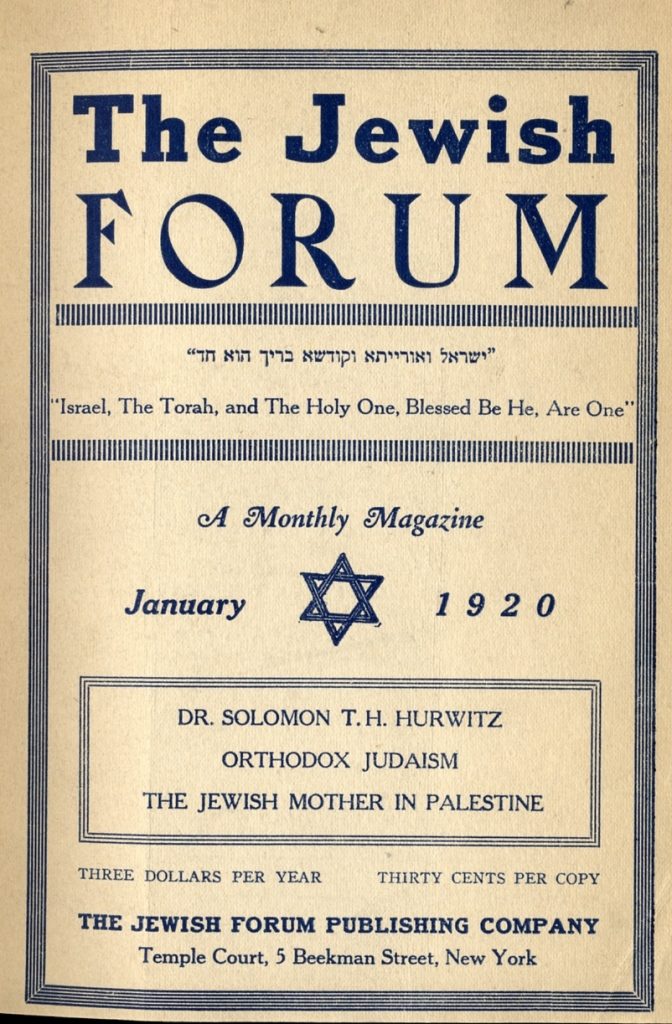 The Jewish Forum served as the voice of the emerging modern Orthodox, English speaking Jewish community in New York and beyond. A column in the souvenir issue (December 14, 1919) explained that this English language magazine “has come to supply a long-felt need — a rational and sympathetic interpretation of Jewish life and thought in harmony with the spirit of our Torah and its sage interpreters.” The journal’s motto, “Israel, The Torah, and The Holy One, Blessed Be He, Are One” appeared on the cover of the magazine. The saying was elaborated on in an editorial in  the first issue: “Jewish nationalism, Jewish culture, and the Jewish religion are inseparable. To emphasize one at the expense of the other two is to unbalance the pivot upon which Jewish life hinges. But while committed unswervingly to this principle, The Jewish Forum is nevertheless ready to open its columns to the dissenting views of other schools of thought. It is to be a forum in the full sense of the word – but essentially a Jewish forum – and Jewish without a qualification. It comes to teach Judaism in the fullest and broadest sense, to reflect the strivings of the living Jewish people.”

The Jewish Forum covered many Jewish issues of the day from a traditional point of view.  Its pages included articles on the growth and progress of Young Israel synagogues and Yeshiva College. It discussed Zionism, including reports on the Hebrew University in Jerusalem.  Religious issues such as kashrut and Sabbath observance, the fight for the five-day work week and holding college examinations on the Sabbath, were debated in its opinions and editorials.  The Forum also featured literary columns, book, art, music, and theater reviews, as well as short scholarly pieces geared for the general reader by Jewish scholars such as Rabbi Dr. Bernard Revel, president of the Rabbi Isaac Elchanan Theological Seminary (RIETS). 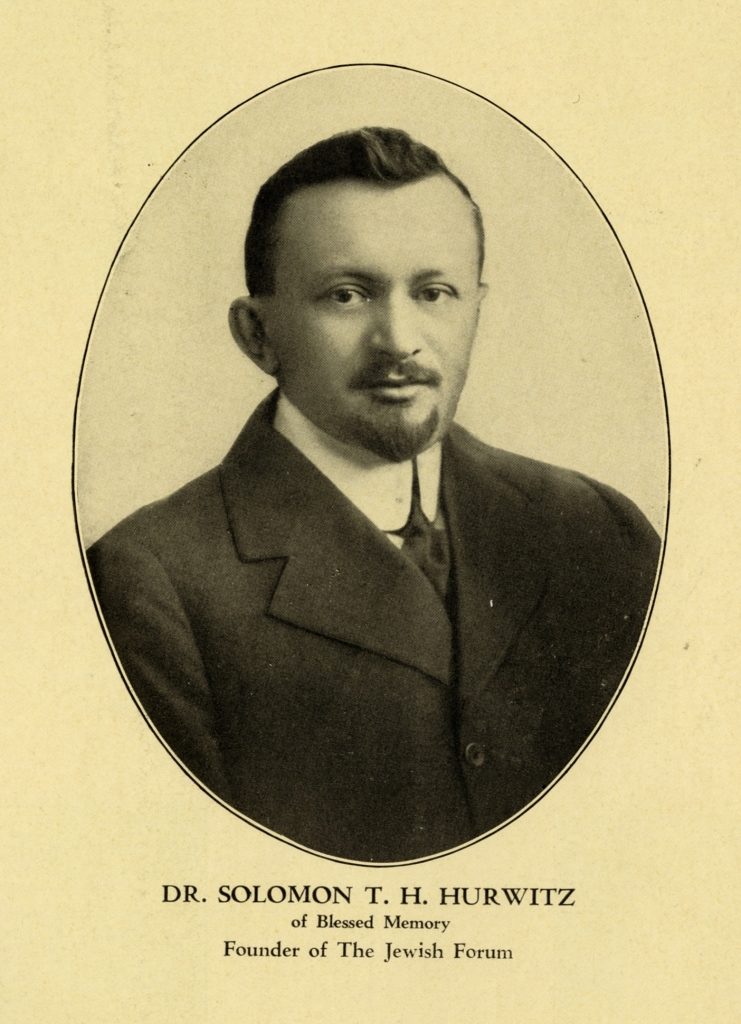 Dr. Solomon T.H. Hurwitz was an outstanding figure in the New York Jewish community of the 1910s. Hurwitz was born in Kovno (Kaunas, Lithuania) in 1887 and immigrated to the United States with his family in 1894. His father, Rabbi Nathan Hurwitz, was the rabbi of the 67th street synagogue (Park East Synagogue). Educated in the New York City public school system, Solomon Hurwitz received a doctorate from Columbia University in Semitic languages in 1912. His doctoral dissertation, published in 1913, was entitled Root-Determinatives in Semitic Speech: A Contribution to Semitic Philology. The manuscript of the dissertation is in the Library’s rare book room.  Rabbi Dr. Bernard Revel selected him to be the first principal of the Talmudical Academy, the high school of RIETS. The Talmudical Academy opened in 1916 as a pioneering venture; the only school of its kind in the United States to offer traditional Judaic studies and secular education leading to a New York State Regents diploma. In addition to his innovative work in Jewish education and journalism, he held positions as Librarian of the Department of Jewish Literature at the New York Public Library, taught Semitic languages at Columbia, and later was a professor of Hebrew and Aramaic philology at RIETS. Dr. Hurwitz’s career was cut short by his death at age 33 in 1920, a victim of the Spanish flu epidemic.

An obituary in The Jewish Forum described Dr. Hurwitz as “a true son of the Jewish people. He gave all his life, his energy, to them.  At a time when the leaders in ultra-orthodox Jewry almost placed extra-Talmudic study under the ban, Dr. Hurwitz, by his personal example, as well as by the first Jewish High School in the country which he established in connection with the Rabbinical College, and conducted with the highest commendation of the State educational authorities, proved that not only is it possible for an up-to-date cultured young man to be an observant Jew despite his secular studies, but that the probabilities are that he will become even a more faithful adherent to Traditional Judaism because of such studies coupled with a thorough grounding in the Torah and Jewish History.” The Board of the Director of The Jewish Forum resolved to continue Dr. Hurwitz’s work and The Jewish Forum “in the same spirit and along the principles established by the late Editor…”

The Jewish Forum ceased publication in 1962. 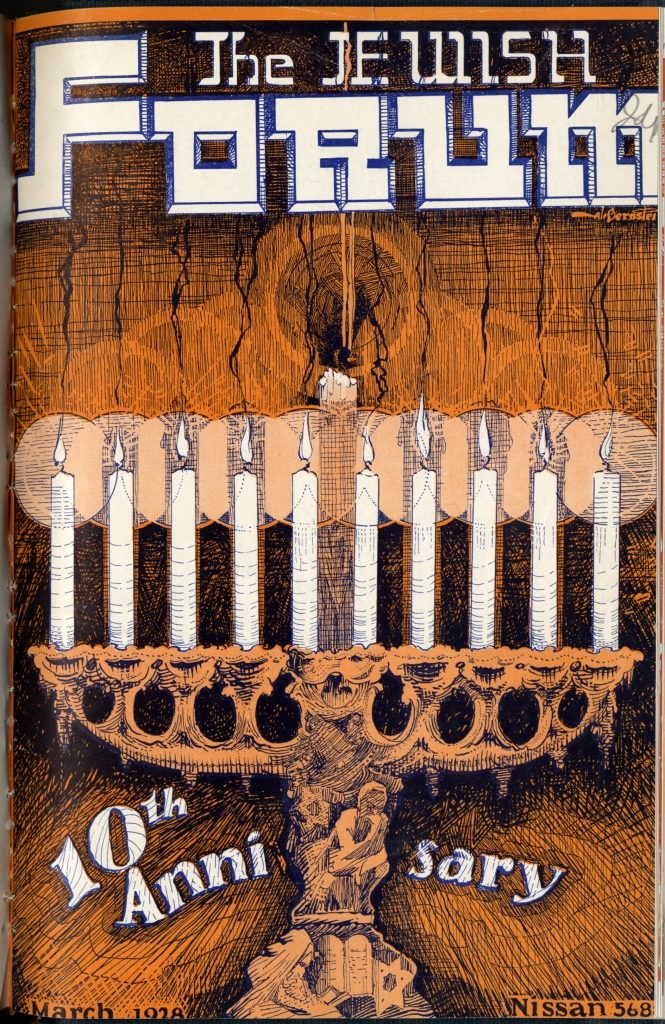 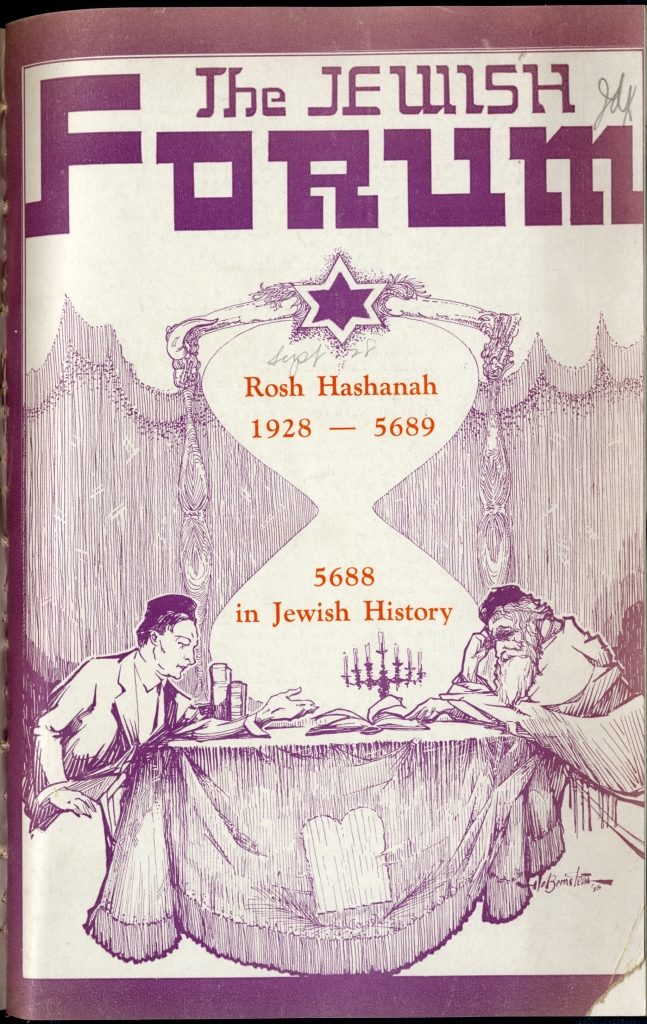 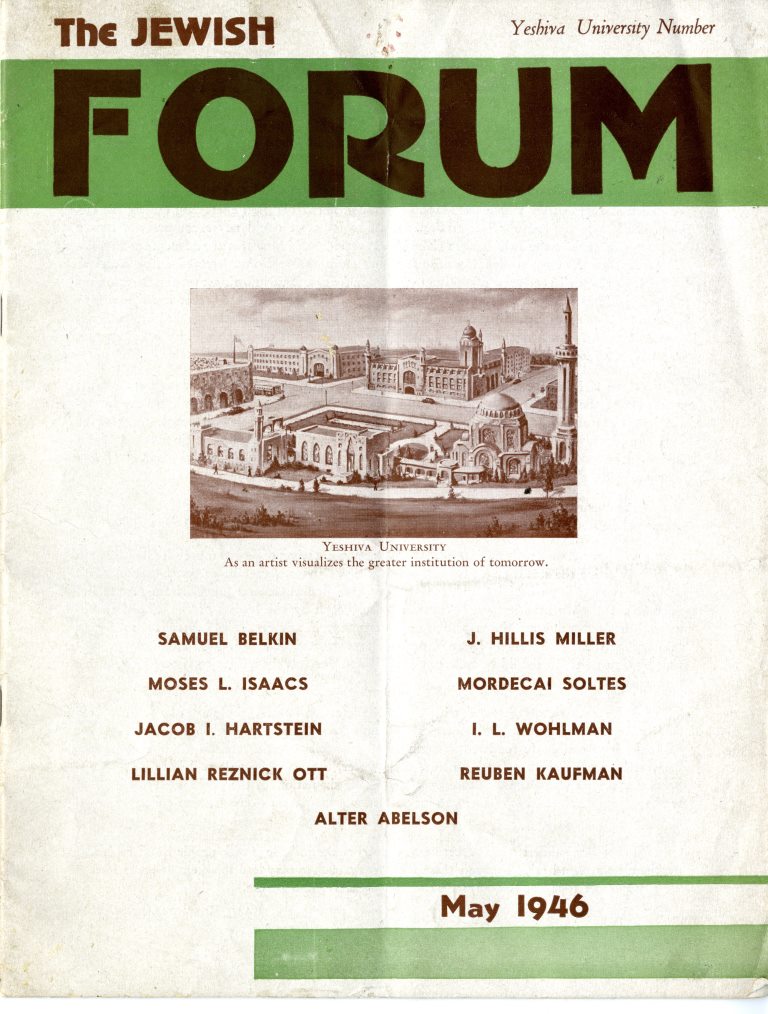