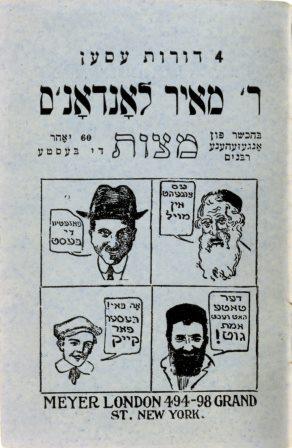 Meyer London’s matzo bakery’s Jewish almanac for 1930-1931 proudly portrays four generations of men lavishing praise on the sixty year old company’s matzo. At first glance, the ad with the cartoon style sketches of four faces evokes traditional Haggadah illustrations of the four sons of the Seder; a closer look reveals that the talking heads with the Yiddish speech “balloons” are four generations of matzo mavens: the patriarch, an elderly man with a flowing white beard, payes, and a tall black yarmulke who observes that the matzo “melts in your mouth,” a middle-aged man with a neat black beard, also wearing a tall black yarmulke, who agrees with the older man, “Father is right – it’s really good!,” a young clean-shaven man in business attire, including a hat, who declares, ”Positively the best,” and a boy sporting a cap who has the final word, “Oh, boy! Better than cake.” The four figures are a family: great-grandfather, grandfather, father, and son, four different and possibly even disparate generations who will celebrate Passover around a Seder table bedecked with Meyer London’s matzo, the matzo which binds them all together. 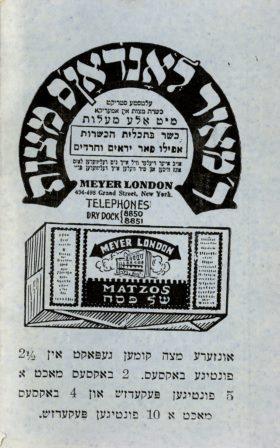 The almanac, published in the form of a small booklet, doubled as an advertising medium for the company. The text touts high standards of kashrut and health benefits as selling points for the matzo factory’s products. The company describes itself as baking the “oldest strict[ly] kosher matzos in America …” and maintaining “the highest kashrut standards, even for the God fearing and pious … .” The name of a rabbinical supervisor is not noted; the kashrut supervision is by “ongeze’ene rabonim – eminent rabbis,” and there are no claims or indications that the matzo is matzo shemurah, the kashrut designation typically desired today for the matzo blessed and consumed to fulfill the requirements of the ritual portions of the Seder. The absence of the name of a mashgiah on the kashrut of the matzo is a change from the 1923 edition of the almanac, where Rabbi Shalom Elchanan Jaffe (who died in 1923) is cited as the rabbinic supervisor. The company also noted health concerns in its publicity and recommended its whole wheat matzo, and matzo meal; in addition, it made products specifically for diabetics.

The 1930-1931 almanac celebrated the sixtieth anniversary of the company. In honor of the event, the company introduced a new product: a new type of thin matzo which it predicted would be popular and successful.

The occasion of the enterprise’s sixtieth birthday also contributed to the explanation of the four personalities featured in the line drawings. The back cover of the small calendar pamphlet offers a different interpretation of the four individuals than the one suggested above. In the spirit of the sages of the Haggadah who spar over parsing the number of plagues, the four people represent the four generations who have eaten Meyer London’s matzo during the sixty years of the company’s existence. A quote borrowed from the Haggadah for the ad explains: “Di akhalu avhatana, ([this is the matzo]that our ancestors ate): our parents, their children, and their grand-children, for four generations, have eaten, currently eat, and will eat R. Meyer London’s matzos.” 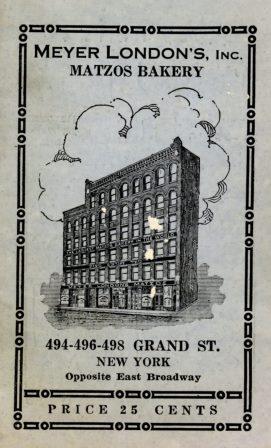 Meyer London, known as the “matzoth king,” was born in Russia and immigrated to the United States in about 1870 when he was in his mid-thirties. His matzo bakery first opened on Bayard Street, a location near the Manhattan Bridge which is no longer in existence. The drawing of the matzo bakery on the cover of the almanac depicts a large building on Grand Street. Meyer London was active on the board of directors of Yeshiva Etz Chaim, a progenitor of the Rabbi Isaac Elchanan Theological Seminary and Yeshiva University. He served as treasurer of the board in 1888 and his name is frequently mentioned in the minutes of the board’s meetings. He died in November 1915 and his family incorporated the business in 1916. The matzo factory continued to function until at least the mid-1930s; the date the enterprise closed needs to be determined. The building still stands on Grand Street; no trace of its past as a matzo bakery is visible. The minutes and the 1930-1931 almanac are held in Yeshiva University Library’s Special Collections.