Painting 1: Copy of a Master Eleanor Roosevelt’s Fireside Chat at Stern College, May 22, 1958 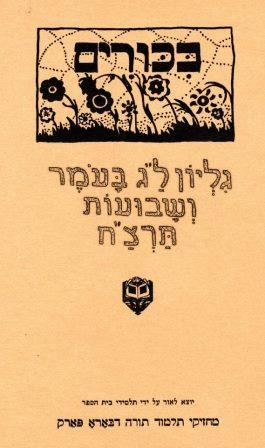 The holiday of Shavuot has other names: Yom ha-Bikurim, in honor of bringing the first ripe fruits to the Temple in Jerusalem, and Zman Matan Toratenu, the time of the giving of the Torah to the Jewish people.

The Machzike Talmud Torah of Borough Park embodied both names of the holiday in its educational work. Popularly known as “The Machzike,” the Talmud Torah, founded in 1908, may have been the first school to offer Hebrew and religious education to children in the growing Jewish community of Borough Park, Brooklyn. Both boys and girls attended classes after the end of their day in public school, on weekdays from 4 PM to 8 PM and on Sundays from 9 AM to 1 PM. According to the entry for the school in the Jewish Communal Register of New York City, 1917-1918, the school body consisted of 415 boys and 230 girls, and the school offered extracurricular activities such as clubs and hosted a congregation.

The Talmud Torah adopted the term Bikurim for the name of the school’s Hebrew journal, which was issued by the students starting in 1928. The periodical appeared five times a year and featured the students’ literary efforts in Hebrew prose and poetry and school news, including, for example, the amount of money donated to the Jewish National Fund. The title Bikurim, First Fruits, may have been selected to represent the students first literary efforts; from today’s perspective eighty years later, the bikurim were the students themselves, a new generation of young Jews, immigrants and children of immigrants, growing in Torah study and knowledge in a new land.

The cover from the 1938 issue of Bikurim for Lag Ba-Omer and Shavuot is typical of the covers of the journal. Yeshiva University Archives owns Bikurim for the years 1936 – 1941; the volumes were donated to the Archives in 1988. This date may reflect the date the Machzike closed its doors; a pioneering institution supplanted by the remarkable growth of Borough Park as a Jewish neighborhood and the myriad of Jewish day schools and yeshivas which now populate the area.