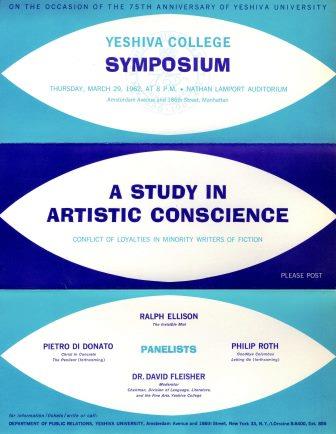 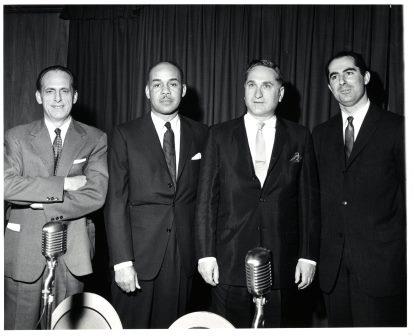 Did you know that Philip Roth, who died yesterday at age 85, spoke at Yeshiva University in 1962, as part of Yeshiva University’s 75th anniversary celebration? The University organized a year-long series of events in conjunction with its Diamond Jubilee. The Symposium, “A Study in Artistic Conscience: Conflict of Loyalties in Minority Writers of Fiction,” became the best known of the 75th anniversary happenings. A panel featuring three authors: Pietro Di Donato, Ralph Ellison, and Philip Roth, moderated by Prof. David Fleisher, took place in Lamport Auditorium in front of a full house. 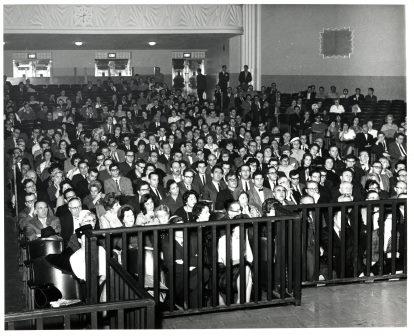 According to the obituary for Philip Roth in the New York Times of May 23, 2018, Roth’s participation in the Symposium was instrumental in his development as an author:

In 1962, while appearing on a panel at Yeshiva University, Mr. Roth was so denounced, for that story [“Defender of the Faith”] especially, that he resolved never to write about Jews again. He quickly changed his mind.
“My humiliation before the Yeshiva belligerents — indeed, the angry Jewish resistance that I aroused virtually from the start — was the luckiest break I could have had,” he later wrote. “I was branded.”

Indeed, the canonical edition of Roth’s works, The Library of America, divides his early writings into: “Novels & Stories 1959-1962” (volume 1), and “Novels 1967-1972” (volume 2), perhaps indicative of the influence of the discussions at Yeshiva in 1962 in Roth’s literary career. 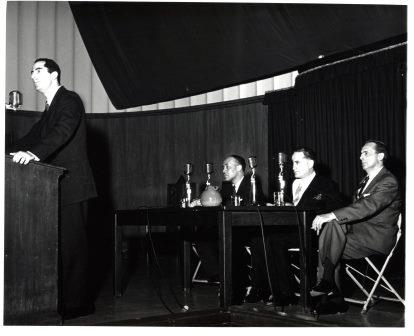 Philip Roth at the podium

Posted by Shulamith Z. Berger
If you enjoyed this article, please consider sharing it!