Philip Roth at Yeshiva University, 1962 The 60th Anniversary of the Pioneers of Stern College for Women: the Class of 1958 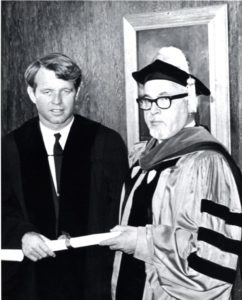 June 6 marks the 50th anniversary of the tragic, violent, death of Robert F. Kennedy, at the hands of assassin Sirhan Sirhan, who shot Kennedy on June 5, 1968. Kennedy, a New York State Senator at the time of the shooting, was murdered while campaigning for the Democratic Party’s presidential nomination. Kennedy had just won the California primary that day.

Robert F. Kennedy was a staunch friend and supporter of Yeshiva University. He was active in the Kennedy Foundation’s establishment of the Rose Fitzgerald Kennedy Center for the Study of Mental Retardation and Human Development at the Albert Einstein College of Medicine and participated in the groundbreaking ceremonies. The citation by Dr. Samuel Belkin, President of Yeshiva University, when Kennedy received an honorary doctor of laws degree at a special convocation at the Albert Einstein College of Medicine on November 19, 1967 states: “You have sponsored and supported legislation to broaden educational enrichments to the gifted and brilliant, as well as to extend the resources of our affluent society to the benefit of the poor, the disadvantaged, the handicapped, the aged and the mentally retarded. Above all, you have subordinated politics to national interests. You are indeed a source of inspiration to all who are striving for the advancement of justice and peace the world over.” 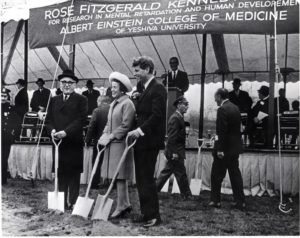 Belkin published a statement on behalf of Yeshiva University on the death of Robert F. Kennedy: “The Yeshiva University family shares the grief of the nation stunned by still another tragic act of violence again a man and therefore against God. The catastrophe also represents a personal loss to me and to the university. With his mother, Senator Kennedy made possible the development of the Rose Kennedy Center at Yeshiva for the study of mental retardation. We were blessed by his friendship and impressed by his warmth and generosity of spirit.” Dr. Belkin concluded: “We must do more than express sorrow and denounce violence. We must dedicate ourselves anew to restoring the moral purpose that motivates us as Americans and as Jews. We are our brothers’ keepers. We must act upon our beliefs by refusing, as John and Robert Kennedy refused, to accept the inevitability of pain for others. When we do, we shall make God’s work truly our own.” President Lyndon Johnson declared June 9 as the national day of mourning for Robert F. Kennedy; Dr. Belkin dedicated all University events that day to the memory of Senator Kennedy.