A Rosh Hashanah Greeting in Wartime, 1918 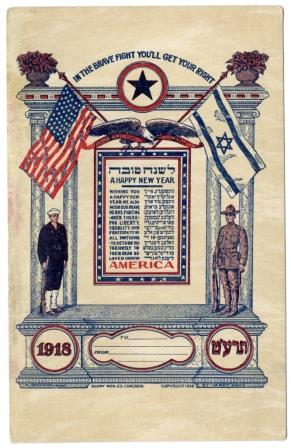 A century ago, Rosh Hashanah in 1918 for Jews in the United States was different than any prior ones during the First World War. Until April 1917, American Jews had only been involved in the war as onlookers who worried about their fellow Jews suffering in the midst of the war in Eastern Europe. American Jewry offered them aid, sustenance, and prayer. The entry of the US into World War I changed the equation; now American Jewish soldiers were fighting on the battlefields of Europe. That reality is reflected in this Rosh Hashanah greeting card for the first Rosh Hashanah American Jews were directly involved in the War. The text, in Yiddish and English, wishes the soldiers a safe and victorious return home to America. The postcard was designed by M. [Mendel] Bennoon, an artist in Chicago, IL. Bennoon was born in Grodno, Belarus, in 1879 and died in Chicago in 1952. The postcard was sent as a New Year greeting for the Jewish year 5679 by friends and relatives to one another and to American Jewish soldiers offering the hope of a year of American victory, “liberty, equality, and fraternity of all nations,” and for the soldiers to return home be-shalom, in safety and in peace.

For more on American Jews and the First World War, see https://blogs.yu.edu/library/2018/04/23/service-to-god-country-and-their-jewish-brethren-american-jews-and-the-first-world-war/