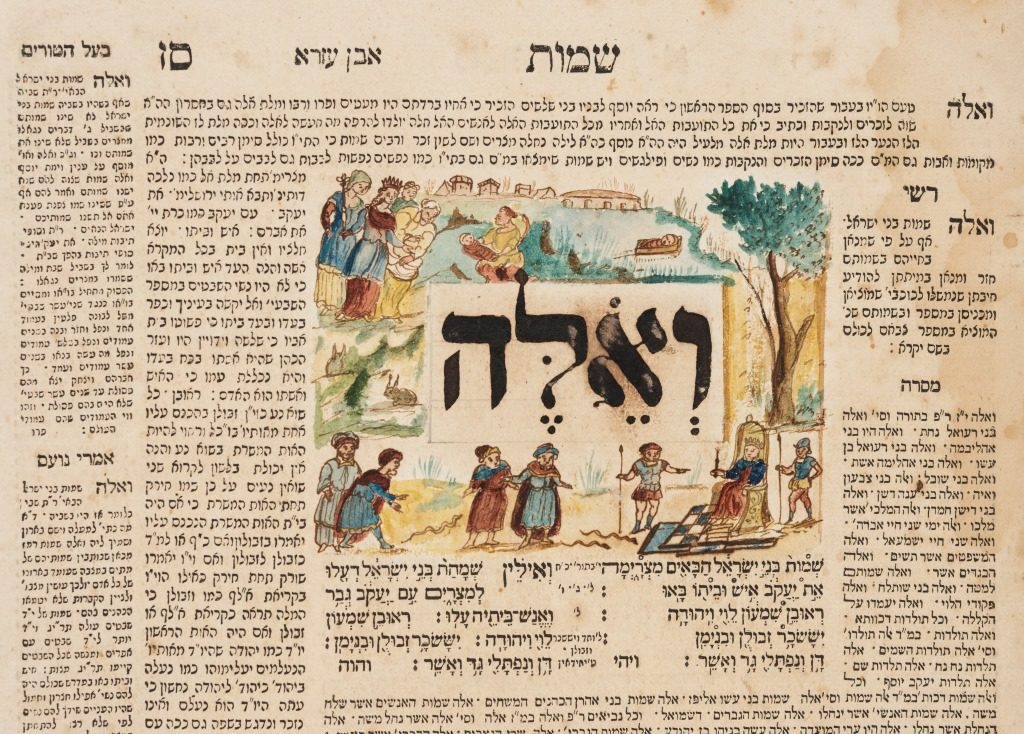 Opening page of Book of Exodus, Amsterdam, 1724. Mendel Gottesman Library, on loan from Richard and Debra Parkoff, in honor of Abraham and Ruth Parkoff.

What images do you conjure up when you imagine Sefer Shemot [Exodus], which we start reading in the synagogue this week?  In the 1720s, an anonymous artist illustrated the opening page of this lavish volume of Shemot with scenes of baby Moses on the Nile, and the adult Moses besting Pharaoh’s magicians in the king’s court. The printer left a large empty space on the opening page for the artist to work, thus this edition was presumably published with the plan of augmenting the print volume with hand drawn illustrations.

This volume of Shemot is part of a magnificent edition of Mikra’ot Gedolot, a Rabbinic Bible, published in Amsterdam between 1724 and 1728 by Moses ben Simeon Frankfurter (1672-1762). Frankfurter’s monumental edition is known by the title Kehilot Mosheh. Other volumes in the library’s edition have variations on the opening word panel: some are illustrated in a manner similar to this one, others include printed woodcuts, and some have blank spaces or partially executed drawings, indicative of an original intent for the empty panels to be illuminated. By the 1720s, the age of print was already well-established; by the mid-eighteenth century manuscripts were experiencing a revival as objects of prestige: perhaps this hybrid edition of print and picture hearkened back to the age of the hand-written illuminated manuscript, or it is an example of a phase in the development of the interplay between print and manuscript as both media evolved and influenced one another, particularly as luxury possessions.

This unique set is on loan to Yeshiva University Libraries through the generosity of Richard and Debra Parkoff, in honor of Abraham and Ruth Parkoff.