Celebration of University Authors Coffee for Passover: The Maxwell House Haggadah in the American Jewish Home, 1932 and Beyond 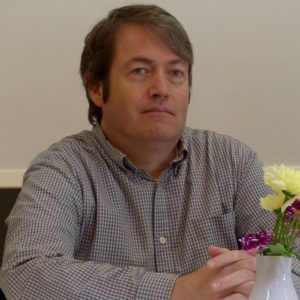 Matt Miller, Associate Professor of English at Stern College for Women, provided insights to his book Collage of Myself: Walt Whitman and the Making of “Leaves of Grass.” Based on Miller’s hands-on examination of Whitman’s original notebooks, the book stems from a breakthrough in dating sections of one notebook in particular, which revealed that Whitman had begun thinking about what became Leaves of Grass only one year before its first publication in 1855. (Previously the notebooks were available in distorted microform images only. Now they reside clearly digitized in the Walt Whitman Archive, of which Miller is the Senior Assistant Editor.) At that early stage, Whitman’s jottings reveal that he didn’t even know if he would write a novel, play, or poem. That something so great could be written in such a short time is astonishing.

Miller described Whitman’s ad hoc method of working. Whitman was an autodidact who made lists of objects in the natural world, and jotted original and pilfered lines on papers strewn around the floor of his workroom and hanging from its ceiling. So compulsive was his way of composing that he made changes in the text even as it was being printed! Miller believes Whitman to have been the forerunner of visual artists like Marcel Duchamp, who juxtapose found objects. 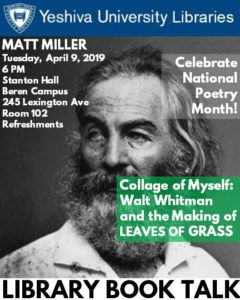 In conversation with Elinor Grumet, Reference and Instruction Librarian at the Hedi Steinberg Library, Miller talked about the translation of Whitman’s work into Yiddish; Whitman’s ideas about religion; his homosexuality; his relationship with Emerson; his understanding of the job of the poet; his creation of a quintessentially American voice; his ideas about what constitutes originality in art; and his influence on Miller’s own poetry. (Miller is a published poet as well as a scholar.)

May 31 marks the bicentennial of Whitman’s birth. Miller distributed handouts of related events in celebration of the anniversary. The library book talk was moderated by Rina Krautwirth, Research and Instruction Librarian at the Steinberg Library.