Coffee for Passover: The Maxwell House Haggadah in the American Jewish Home, 1932 and Beyond

Coffee for Passover: The Maxwell House Haggadah in the American Jewish Home, 1932 and Beyond 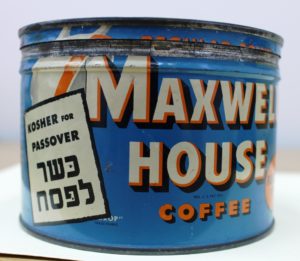 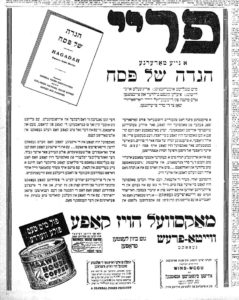 This distribution method hearkens back to the original 1932 Maxwell House Haggadah, which was billed in advertisements in the Yiddish press as a gift from General Foods Corporation to its Jewish customers. Any baleboste who purchased a can of Kosher for Pesach Maxwell coffee, would receive a new, modern, illustrated Haggadah with an English translation for the Seder.  The ads for the Haggadah encouraged housewives to buy the coffee well before Passover, so the grocer would know how many “free” Haggadahs to request for customers. The introductory ad, which appeared in the Morgen Zshurnal (Jewish Morning Journal) on April 13, 1932, and the following day in the Forward, highlighted the word פריי  (free) in large, bold, type crowning the ad. The promotion included an image of the cover of the Haggadah. 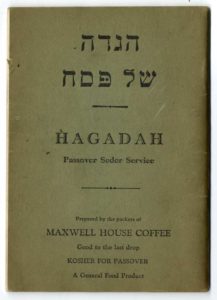 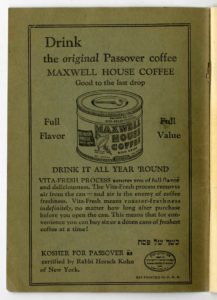 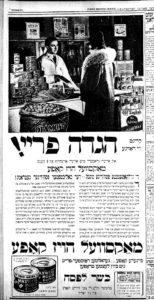 MZ 3-4-37. Collection of Shulamith Z. Berger. Photographed at the National Library of Israel.

These ads were designed to make Maxwell House appealing to the Jewish consumer in a number of ways. The ads of 1932 and 1937 touted the virtues and qualities of the coffee: it was kosher for Passover and packed under the supervision of Rabbi Zvi Hersch Kohn, as it had been in previous years, and was the only coffee for Passover approved by the rabbinic periodical, HaPardes. Serving suggestions in the ads were designed for the Jewish home, such as, at the Seder and at all fleishik (meat) meals you can drink black coffee, and at breakfast or with milchik (dairy) meals you can drink it with milk or cream.   Good coffee will help you enjoy your holiday …  drink it with your latkes, chremslekh, fried matzoh, and Pesachdik cake. The ads also pointed out that every Sunday you could listen to the Jewish Symphony Ensemble in a program of classical Jewish music while you drank your coffee.

Maxwell House Coffee had already been reaching out to the Jewish food consumer, known in advertising parlance of the day as part of the “foreign language market” before 1932, when it was a Cheek-Neal product, prior to its ownership was transferred to General Foods. The advertising campaigns and the kosher for Passover certification were the brainchild of Joseph Jacobs, a pioneer in marketing to the Jewish market, who convinced the southern based non-Jewish company that the Jewish and Yiddish speaking community, comprised of comparative newcomers to America, was a worthwhile clientele to pursue. The kashruth status of coffee for Passover is a question for next year; Joseph Jacobs’ role in the matter is mentioned in Anne Cohen’s article, cited in the “Sources.” 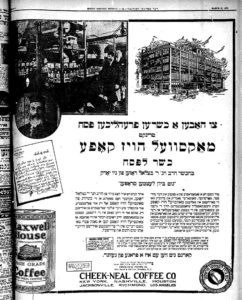 MZ 3-22-26. Collection of Shulamith Z. Berger. Photographed at the National Library of Israel.

The Maxwell House Haggadah has certainly been the longest lived and most successful of Maxwell House’s overtures to the Jewish community over the past century. Maxwell House was  still produced by Cheek-Neal in 1926 when the the company offered a free booklet in Yiddish, “Vi azoy tsu makn a gute kupe koffee” (MZ, 3-22-26) in conjunction with an ad that the coffee was kosher for Passover, under the supervision of Rabbi Bezalel Rosen of New York.

In 1928, a Maxwell House ad depicted a happy multi-generational family around a table – all the adults were drinking steaming cups of coffee, and the text stated (in Yiddish): From the land where pleasure in life is a tradition, to the people, for whom pleasure in life is a mitsveh, and went on the explain that Maxwell House coffee was created in the “old south;” the ad implies that the coffee is a gift from Maxwell House (a non-Jewish company) to the Jewish people, who deserve the best (MZ 11-19-28). The image promoted family harmony at a time when Jewish parents and children may well have been speaking different languages and at different stages in their adjustment to life in the United States.

In 1936, (MZ 4/36)  Maxwell House ad ran a series of ads depicting the life of Benjamin Ginzberg “from the cradle to the silver wedding anniversary.” 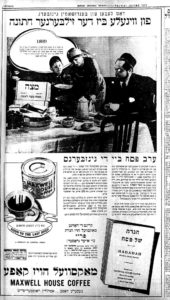 MZ 4-5-36. Collection of Shulamith Z. Berger. Photographed at the National Library of Israel.

This advertising campaign depicted another Jewish family, the Ginzberg’s in ads featuring Maxwell House coffee as part and parcel of the celebrations of Jewish life cycle events and Jewish holidays: in this ad, “Passover Eve at the Ginzberg’s,” the cartoon bubble indicates that in 1899, Benjamin’s family couldn’t enjoy coffee for Passover; now they can, thanks to Maxwell House.

Women were frequently the focus of Maxwell House advertising, as seen in the appeal to the baleboste in the 1937 ad for the Haggadah. An earlier Yiddish ad from 1928 (MZ 11-12-28) discusses the  “Fifty years of progress of the Jewish woman in America,” in an effort to unite the history of the Jewish woman in America – mothers and daughters of the period of Eastern European Jewish migration –   with the tradition of drinking Maxwell House coffee. 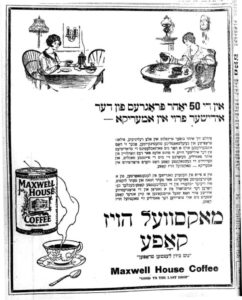 MZ 11-22-28. Collection of Shulamith Z. Berger. Photographed at the National Library of Israel. 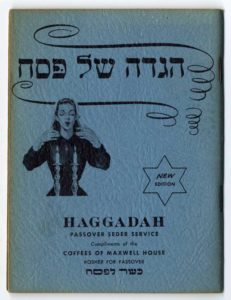 The new 2019 Marvelous Mrs. Maisel Edition, Midge’s New 1958 Edition of the Maxwell House Haggadah purports to be from 1958, thirty years after the 1928 advertisement which discussed the progress of Jewish women in America. The show, the Marvelous Mrs. Maisel, is a twenty-first century take on the Jewish woman of 1958, and perhaps a reworking of Herman Wouk’s 1955 novel Marjorie Morningstar, which is set in the 1930s. Mrs. Maisel, a fearless, brash, comedienne and career woman, is a very different representation of a Jewish woman than the Jewish woman of the 1928 ad or the baleboste of the 1930s advertisements. The advertisements and approach of Maxwell House (now a Kraft Heinz product) over the past ninety years to the Jewish consumer market provide a window into the changes in views of the Jewish woman during that time period and shifts in how corporations approach consumers. The Haggadah, an advertising ploy, published by a company which initially needed to be coaxed to advertise its wares to a new and unfamiliar market – the Jewish market, has become a Jewish icon in its own right. Now, ninety years later, that new market is mainstream; the success of the “Marvelous Mrs. Maisel” show in conjunction with the new edition of the Haggadah are evidence that Jewish characters and culture are mainstream forces in contemporary American popular entertainment and media – an American Jewish meeting of Haggadah and Hollywood.

To see the Mrs. Maisel Haggadah, please use this link: https://www.amazon.com/Marvelous-Limited-Passover-Haggadah-Maxwell/dp/B07PGGXVGG/ref=sr_1_1?crid=151ATUUOU3ZTL&keywords=mrs.+maisel+haggadah&qid=1555456473&s=gateway&sprefix=mrs.+maisel+%2Caps%2C148&sr=8-1

Images of Maxwell House ads photographed by Shulamith Z. Berger from original print issues of the Morgen Zshurnal held by the National Library of Israel in Jerusalem.