Coffee for Passover: The Maxwell House Haggadah in the American Jewish Home, 1932 and Beyond Leah Adler – In Memoriam and a Tribute 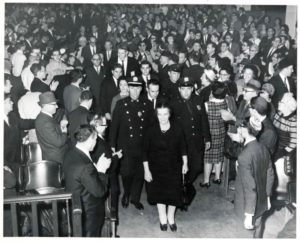 Israeli stateswoman Golda Meir’s first documented connection with Yeshiva University was in June 1948, only two weeks after the founding of the State of Israel, an event which the students of Yeshiva celebrated and documented in the pages of the Commentator. 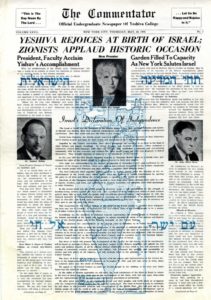 The Commentator, May 20, 1948
Yeshiva University Archives

A telegram in the Yeshiva University Archives dated June 3, 1948, from Golda Myerson [Meir], to Dr. Mordecai Soltes, a professor of Community Service at Yeshiva University, requested Soltes’ help to raise funds for the new State of Israel.   Dr. Soltes was active in many Jewish communal activities, including the United Jewish Appeal.

Dr. Soltes had been invited by William O’Dwyer, Mayor of New York City, to a meeting at City Hall to “join in the ceremonies that will highlight the observance of June as United Jewish Appeal Month in Greater New York.” Mayor O’Dwyer proudly stated that citizens of New York had “… always set the pace for the entire nation when the call has been sounded for support of democratic, life-rebuilding activity,” and noted that “with the creation of the new State of Israel, the humanitarian programs of all the agencies of the United Jewish Appeal have taken on tremendously increased significance.”  In her telegram to Soltes, Golda Meyerson urged him to attend the meeting on behalf of the UJA, and described the nascent State of Israel’s goals and pressing need for funds as “a matter of life or death.” The breathless telegram explained: “Just arrived from Israel where our people are fighting and dying for freedom and justice. They look to America for brotherly assistance. Even in the midst of struggle, Israel eager to bring in surviving Jews of Europe.  In this gravest emergency defense of Israel must have top priority. Urge you to place it on agenda for your next meeting and vote all available funds to United Jewish Appeal.” 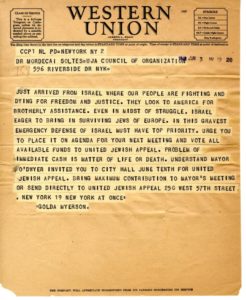 Golda Myerson’s appeal to the Jewish conscience invoked the Holocaust and the hope for the future offered by the birth of the State of Israel. It brought concrete results. David Ben-Gurion, who became the first Prime Minister of the State of Israel, knew that the incipient State needed money for weapons for a modern army.  After the United Nations vote to partition Palestine in November 1947, Ben-Gurion planned to travel to the United States on a fundraising tour, but Golda Myerson prevailed upon him to send her in his stead.  She told him that she can’t do what he needs to do in Israel, but she can do what he planned to do in America.  “Two days later, with no more baggage than the thin spring dress she wore and the handbag she clutched in her hand, she arrived in New York on a bitter winter’s night, so precipitate had her departure been that she had not had the time to take the convoy up to Jerusalem to fetch a change of clothes. The woman who had come to New York in search of millions of dollars had in her purse that evening exactly one ten-dollar bill. When a puzzled customs agent asked her how she intended to support herself in the United States, she replied simply, ‘I have family here.’” Thanks to her ‘family,’ she raised fifty million dollars, ”nearly twice the figure set by David Ben Gurion, three  times the entire oil revenue of Saudi Arabia for 1947.”  Ben Gurion greeted her at the airport upon her return. “’The day when history is written,’ he solemnly told her, ‘it will be recorded that it was thanks to a Jewish woman that the Jewish state was born.’”

Golda Meir later visited Yeshiva University on behalf of the State of Israel on two occasions: in 1963 when she was Israel’s Foreign Minister and addressed the YU Alumni Association on “Aspects of Israel’s Foreign Policy,” and again in 1973 when she was Israel’s Prime Minister and received an honorary degree.  A YU press release described the event: “Mrs. Meir shed tears as an audience of 2,000, primarily students, chanted a thunderous ‘Am Yisroel Chai’ (the nation of Israel lives) in a prolonged standing ovation. The occasion marked the culmination of Mrs. Meir’s visit to the United States, and occurred amidst tight security precautions in Lamport Auditorium. It was the first in a series of events celebrating Dr. Belkin’s 30th anniversary as YU President, to be marked at a December dinner.”  The press release also noted YU’s “strong link to Israel” in the physical form of the Caroline and Joseph S. Gruss Center which was under construction in Jerusalem at the time and recorded words from Stern College Student Council president Shirley Stark to Mrs. Meir: “‘We plan to raise our families in Israel.’ Deeply touched, the Israeli Premier rose to tenderly kiss Miss Stark.” 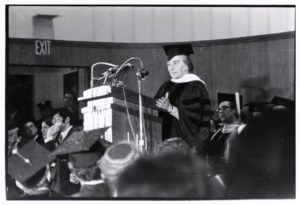 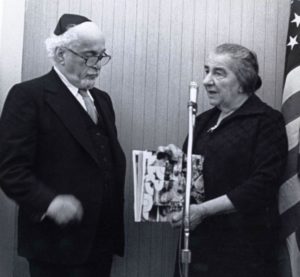