In Memory of RIETS Students in Hebron, August 1929 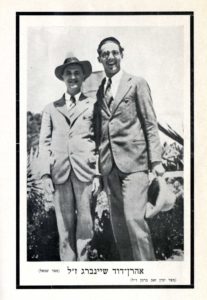 Today, it is de rigueur for modern Orthodox student to spend a “gap” year or two studying in yeshivas in Israel after they finish high school, prior to starting their college studies. Ninety years ago, in 1929, two RIETS (Rabbi Isaac Elchanan Theological Seminary) students decided to attend the Knesset Israel (Slabodka) Yeshiva in Hebron, a pioneering venture at the time.  The yeshiva was commonly known as the Hebron Yeshiva, because of its location in Hebron in pre-state Israel, in what was then Mandatory Palestine. 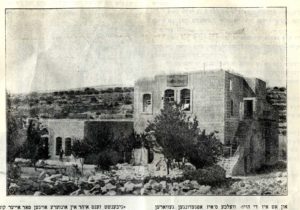 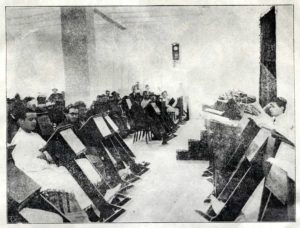 The Knesset Israel yeshiva in Slabodka, near Kovno, Lithuania, had opened a branch in Hebron in 1924 when there were fears that the Lithuanian government would start drafting yeshiva students. 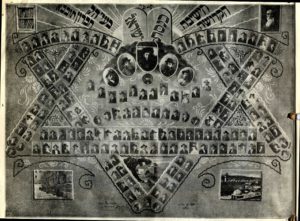 The Hebron yeshiva published an illustrated pamphlet in Yiddish entitled Tsum Yudishn Folk with a history of the yeshiva from its opening in 1924 until 1929 when the pamphlet was published, not long before the tragic Hebron massacre of 1929.  A quote in the booklet states that the Arab elders of the area went to the yeshiva’s administration the day the yeshiva opened its doors and stated, “You are blessed in our eyes for coming to us in Hebron and founding the yeshiva.” One student at the Hebron yeshiva, Aharon Dovid Shainberg, described the yeshiva’s relationship with the local Arab population in a letter to his parents in Memphis, Tennessee, on December 19, 1928: “Four years ago when the Yeshiva moved from Slabodka to Hebron, there occurred not a little trouble from the Arabs here. Stones were thrown into the institution buildings; students were attacked on the streets, etc. The present state of affairs speaks much for the excellent character of the Yeshiva student body. By the sheer force of refinement of action and nobility of heart the Yeshiva Bachurim have won over the Arabs as their staunch friends from former enemies. In every step, in every word – in speech & action the student is a gentleman. Even Arabs were conquered by these weapons.”

Unfortunately, the yeshiva’s positive relations with the neighboring Arab population did not last. In August 1929, riots in Jerusalem, partly over the status of the Western Wall, spread to Hebron, and on the Sabbath of August 24, 1929 (18 Menahem Av), sixty-seven Jews, including twenty-four students of the Hebron Yeshiva, were killed in the Hebron Massacre.  It is noteworthy that in the midst of the killings, some Jewish residents of Hebron were protected by their Arab neighbors. After the massacre, the Yeshiva relocated to Jerusalem.

A memorial book, Sefer zikaron li-ḳedoshe Yeshivat Ḥevron “Keneset Yiśraʼel,” published by students from the Hebron Yeshiva on the one-year anniversary of the massacre, includes biographies and photographs of the slain students. 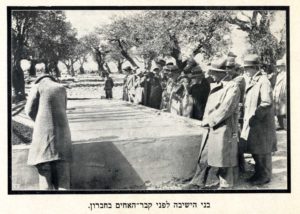 Shainberg’s biography notes that he was a student at the Rabbi Isaac Elchanan Theological Seminary for a year; no record of his attendance at RIETS is extant.  A photo of Shainberg with his good friend Rabbi William (Bill) Berman, also murdered in the massacre, is in the memorial book. Berman was a RIETS product through and through – he entered the yeshiva as a twelve-year-old from Philadelphia, graduated from the high school (1923), and received semicha (rabbinic ordination) from RIETS in 1927. 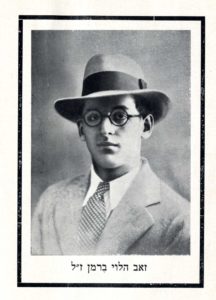 Bernard Revel, president of RIETS, remembered Berman thus: “A proud American and an understanding son of his people, with a deep knowledge of the Torah, a charming personality, and an eloquent speaker.  In his short life he made many sacrifices for the Torah, and it was given to him to make the supreme sacrifice ‘al Kiddush Hashem.’”

Another RIETS student, Benjamin Hurwitz, also was murdered in Hebron.  Hurwitz was a graduate of the high school (1927) and of the Teachers Institute; he was on a leave of absence from RIETS at the time of his death. 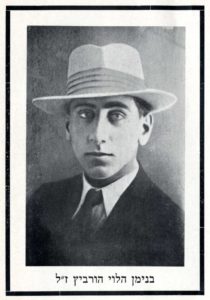 Revel described him as “a noble soul, full of life and sunshine.” The high school yearbook, the Elchanite,  sheds light on both Berman and Hurwitz, who were leaders in their years in the high school.  Both were class presidents and active in many school activities, including sports. Hurwitz was known as the “class optimist.” Both had interesting nicknames: Berman was “Kid Geff;” Hurwitz was “Ben Hur.”  In the “Legacy” section of the yearbook, Berman and others on the Discipline Squad jokingly referred to Berman’s will: “We … bequeath our places on the Discipline Squad to those who expect to become Traffic Cops in future life.”

Benjamin Hurwitz, an only son, lives on at Yeshiva University; his parents established an award in his memory, the Benjamin Hurwitz Award for Excellence in Talmud, an honor which is still bestowed on an undergraduate student to this day.

Yehi Zikhram Barukh – May their Memories be for a Blessing