The 1939 World’s Fair opened in New York with the optimistic theme, “The World of Tomorrow.”  The Fair organizers envisioned a future world of 5000 years of tomorrows, earth dwellers of 6939, who would be intrigued by the civilization of their ancestors. The Westinghouse Company took on the challenge of creating a time capsule capable of lasting 5,000 years and curating its contents.  A Yeshiva College publication, Portraits of Eminent Mathematicians by David Eugene Smith, was selected to be part of this treasure, buried at the site of the World’s Fair on September 23, 1938. Portraits of Eminent Mathematicians was an offshoot of Yeshiva’s periodical, Scripta Mathematica. Scripta Mathematica was the brainchild of Yeshiva College mathematics professor Jekuthiel Ginsburg, editor of the quarterly from its inception in 1932 until his death in 1957. 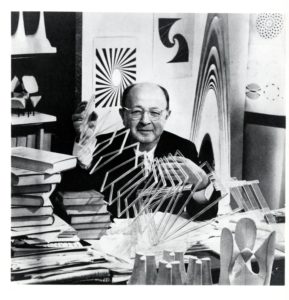 In the words of David Fleisher, professor of English at Yeshiva College, “The honor accorded these publications [Scripta] at the World’s Fair was a significant indication of the world-wide recognition which in a few short years the purposes and accomplishment of Scripta had achieved.” 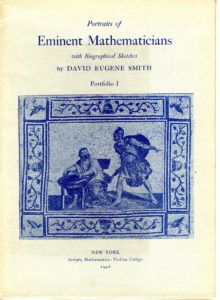 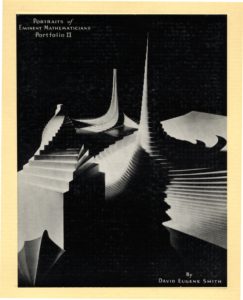 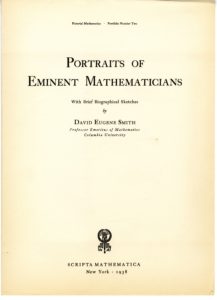 Bernard Revel, President of Yeshiva College, explained in the first issue of Scripta that “the policy of the Journal is in agreement with the ideal of ‘learning for the sake of learning’ which inspired the founders of Yeshiva College.” The initial issue also described the goal of the periodical: it

will be … devoted chiefly to the history and philosophy of mathematics. . .. In the history of mathematics the editors will consider material solely from the point of view of originality and general interest, avoiding any geographic or national preferences; their viewpoint is that mathematics is one and indivisible whatever the origins of the component parts. The editors will be equally impartial with respect to the periods studied. … As in the case of history, so in that of philosophy, it will be the object of the editors to arouse the interest of mathematicians and intelligent laymen. … A special effort will be made to have the articles free from such technicalities as would repel the intelligent reader who has not had a thorough training in mathematics. 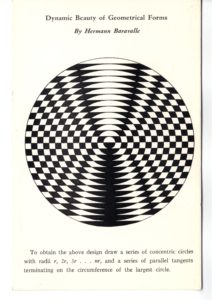 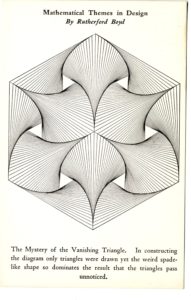 Visuals and pictorial material were a special feature of Scripta Mathematica; arresting black and white diagrams, geometrical forms and figures printed on glossy paper illustrated its articles; some were reproduced in a series of Scripta postcards.

Portraits of Eminent Mathematicians, a portfolio of portraits and biographical information on famous mathematicians through the ages, fit Scripta Mathematica’s mission of mathematics for the masses, popularizing math for the lay reader.  This characteristic may have contributed to Scripta Mathematica’s inclusion in the time capsule, in the category of “Our Sciences and Techniques,” together with articles from the Encyclopaedia Britannica. But how would two volumes of Portraits of Eminent Mathematicians, each a bit over 14 inches in height, fit into the time capsule which measured slightly more than 8 inches in diameter, along with all the other items? The solutions was miniaturization onto microfilm, a relatively new technology at the time. The time capsule was outfitted with a magnifying glass for reading the microfilm, as well as instructions for constructing a more sophisticated microfilm viewer.

Scripta Mathematica was known the world over; authors and subscribers hailed from around the globe.  Albert Einstein served as Chairman of the Honorary Advisory Board of the Friends of Scripta Mathematica. An undated press release from the 1930s, prior to the Second World War notes: “More than 250 colleges in America and in other parts of the world are subscribers to the journal. The contributors include scholars from Japan, India, Russia, Italy, Palestine, France, Germany, and every part of the world where scholarship flourishes.” Scripta Mathematica and Jekuthiel Ginsburg’s efforts to equalize mathematics for all were featured in numerous American publications such as The New York Times Magazine, Life Magazine and the New Yorker, as well as periodicals in England, Greece, Switzerland, France, and Germany. Scripta Mathematica’s program for promoting mathematics “has been described in Amerika, the U.S. Government publication issued in Russia; by the U.S. Information Agency and other governmental groups.” 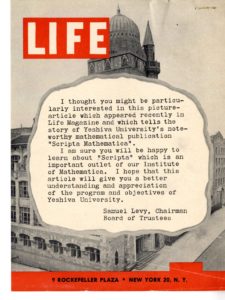 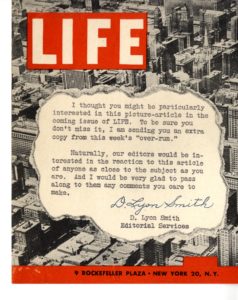 The World’s Fair marked a turning point in the history of the world; the Fair opened not long before the outbreak of the Second World War and closed in 1940 in the midst of the War. Scripta Mathematica was viewed by its creators during this time period as a bulwark against prejudice and hatred, and sought, by dint of its very existence, to set an example of harmony for the world. 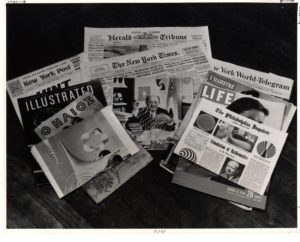 Scripta Mathematica featured all over the world

As early as 1933, Bernard Revel expressed these sentiments in a letter to Ginsburg regarding Scripta Mathematica:

The significance of …  Scripta Mathematica, is deepened in these days by the dark cloud of medieval oppression and persecution in a home of Kultur, where books, even in the pure science of mathematics, are being destroyed, as though research, culture, the pursuit of disinterested learning, were the sole prerogative of a single people. It is truly symbolic of American liberalism and the spirit of true scholarship, that the best scientific minds of several lands have united to make possible the issuance and quality of “Scripta Mathematica” published by a college under Jewish auspices. The cooperation of these scholars and friends of learning shows the broadly human nature of true concern for cultural advancement.

And in 1936, Revel greeted a dinner on behalf of Scripta Mathematica thus: “Greetings and gratitude of Yeshiva College to … all the distinguished gathering cognizant of the need of order, symbolized by mathematics in our chaotic times.”

The time capsule and Scripta Mathematica were not Revel and Yeshiva’s sole connection to the World’s Fair. In May 1940, Revel addressed the first public meeting of the Jewish Religious Education Board which took place at the Temple of Religion at the Fair.  Revel reflected on the state of the world and its relationship to the Fair, and the slogan of the fair, which had changed from “The World of Tomorrow” in 1939 to “Peace and Freedom” in 1940, a commentary on the mood of a world at war.

Last year this Fair was dedicated to the ‘World of Tomorrow. This year it is concerned more with the world of today, or with what is left of a world divided and at war with itself … Near us stand some national pavilions without a country, victims of the Teutonic fury: The Czechoslovakian and Polish pavilions. … Yet these national pavilions without a country are no mere fiction; they are symbols, as is the [Jewish] Palestinian pavilion, of a greater reality. 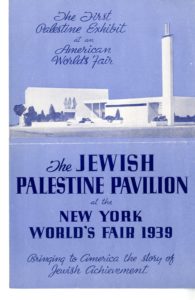 For the status imposed upon these nations by the forces of hatred and destruction are but a passing shadow, a nightmare in the dark night which has descended upon mankind. A new day, the day of the Lord, will dawn upon suffering humanity, and justice, peace and freedom, and spiritual harmony will ultimately triumph. The slogan of ‘Peace and Freedom’ truly proclaims ‘The World of Tomorrow.’

Revel died within the year – in December 1940 – and did not live to see the end of World War II. May his message of peace, echoed in the eighty-year-old motto of the World’s Fair, be fulfilled. 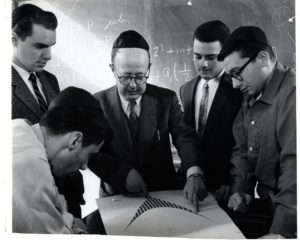 Ginsburg with his students in an undated photo. Ginsburg was quoted as saying every student has the capacity to enjoy mathematics. “’This attitude, making mathematics a source of pleasure, is far more important to me than to have our boys plan to apply it to making bombs.’” 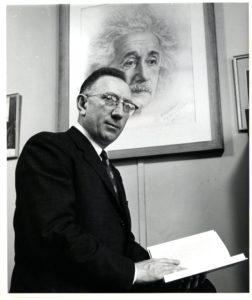 Abe Gelbart in front of a drawing of Albert Einstein, probably by Morris J. Kallem.

After Ginsburg’s death in 1957, his protégée, Abe Gelbart, succeeded him at Yeshiva. Ginsburg had initially met eleven-year-old Gelbart in the reading room of the New York Public Library in 1922; Ginsburg became Gelbart’s mentor, friend, and colleague.  Gelbart, a professor at Syracuse University, was appointed as head of Yeshiva’s Institute of Mathematics and as editor of Scripta Mathematica in 1958. Gelbart soon became dean of Yeshiva University’s new Graduate School of Mathematical Sciences, a forerunner of the Belfer Graduate School of Science.  Gelbart served as Dean until 1968. The final issue of Scripta Mathematica was published in 1973. 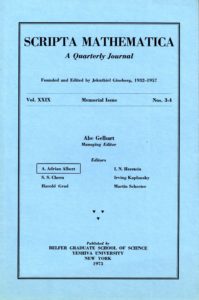