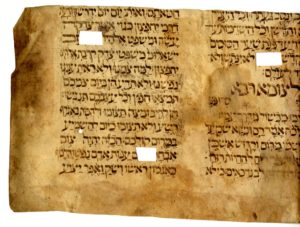 What are the vacant spaces: precise, deliberate incisions reminiscent of a Purim face mask, which gaze up from this manuscript fragment? This remnant of a manuscript page mysteriously made its way from 15th century Spain to the Mendel Gottesman Library’s rare book room in New York. The parchment piece probably originated in pre-Expulsion Spain, either as part of a Mahzor, or a Humash, a Bible with Haftarot. Though the page is incomplete, the contents are clear, and a section even bears a title: “Le-tsoma raba,” for the Great Fast, an Aramaic term frequently used in the Jerusalem Talmud for Yom Kippur. Portions of both the morning and afternoon haftarot for Yom Kippur, from the Books of Isaiah and Jonah, follow. The text immediately above the phrase Le-tsoma raba is from Jeremiah 31: 38-39, a continuation of the haftara for the second day of Rosh Hashana, or a variant tradition or nusah; clarification of the nusah might help further identify the fragment.

The missing text is easily identifiable – the gaps once held the holy name of God, Y-H-W-H, the Tetragrammaton. And, of course, whatever text was on the other side of the name of God on the page is now gone forever too. Why was God’s name excised? Presumably the parchment was cut when it was no longer used for its original liturgical function and thus became more valuable as a commodity, as raw material. What might initially appear to be a desecration of a sacred text was a way to protect God’s name, to desacralize the text. The Tetragrammaton was deliberately sliced out and presumably treated as shemot and buried or placed in a geniza. Now the remaining parchment could be re-used, possibly for binding a book. Whether or not this approach to recycling sacred documents is correct according to Jewish law is a different question; it was the method the person who needed the scrap of parchment chose at the time. 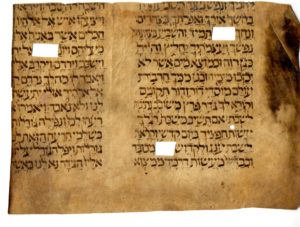 The attempt to desanctify the text fails on some level; the empty spaces are striking and draw attention to themselves; any reader familiar with the text immediately and automatically fills in the blanks and supplies the name of God. The ineffable name of God is rendered almost more present by its absence. The void provides a glimpse of the invisible; it creates a sacred space, space to reflect, a contemplative space.

The 15th century manuscript piece (Ms. 1068) arrived at the Yeshiva University Library together with an 18th century manuscript (Ms. 1067), a compilation of works by the kabbalist Ḥayyim ben Joseph Vital and Mordecai Alfakhar. Both manuscripts are about the same size. Maybe the parchment was part of an earlier binding of the 18th century work? Or meant to be used as part of a new binding? Closer examination of the stains and marks on the parchment may offer some clues. 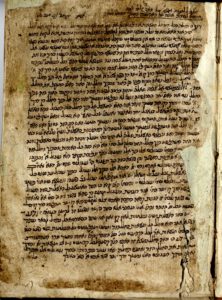 For an informal discussion of manuscript 1068 on the Hebrew Codicology and Paelography facebook page see: