Before the Maccabees: Basketball at Yeshiva College in the 1930s William B. Helmreich, Of Blessed Memory 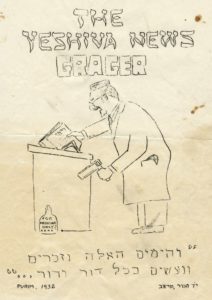 Even before Yeshiva College’s first graduating class in 1932, before the birth of the Commentator, students were provoking the administration and publishing Purim papers. The Yeshiva News GRAGER depicts a rabbinic style figure standing at a shtender reading a megillah while clutching a grager. Placed next to the podium is a wine jug in disguise, labeled “For medicine only?,” a reference to medical prescriptions doctors dispensed during Prohibition for use of wine for medicinal purposes. Wine was also permitted during Prohibition for sacramental purposes, such as kiddush, and rabbis were allowed to obtain licenses to sell wine, a loophole which led to the growth of Jewish congregations and congregants, including ones who weren’t Jewish.  The jokesters of 1932 alluded to this situation in their Purim menu which featured “Wine – Noah Lot Inc., Sacramental bootleggers,” and in the Yiddish “Ph.D. dissertation” by Prof. Parshandata on hamentashen which suggested serving hamentashen with wine, if not for Prohibition.

The paronomasiac Purim editors focused much of their humor on Puterman’s, as the Yeshiva College cafeteria was known at the time. On the bottom of the “menu” page is an ad, “Compliments of the Ex-Lax Corporation, Maḥar yihiyeh ha-ot ha-zeh [tomorrow you will see this sign].” This imitation ad is a snippet of an ad the Ex-Lax Corporation ran annually in the Nir, the student yearbook of the Teacher’s Institute for Men, beginning in 1925. 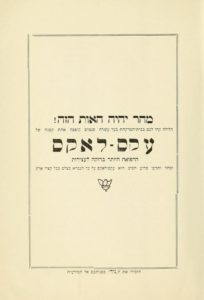 The ads were always in Hebrew, and after the introductory Biblical verse, the text continued as follows: “tonight you’ll go to the drugstore and buy a small container of Ex-Lax for ten cents, the best known remedy for constipation, and tomorrow you will know why Ex-Lax is a favorite of all those created in the image [of G-d] all over the world.” Puterman’s cuisine aside, why was Ex-Lax advertising in the Teachers Institute Hebrew periodical? The answer lies in the career of Israel Matz, founder of Ex-Lax. Matz was born in Kalvaria, Lithuania in 1869 and died in New York City in 1950. Matz immigrated to New York where he joined forces with pharmacist Max Kiss in 1906 to form the Ex-Lax Company. Kiss (1882-1967), a Hungarian immigrant to New York, received a pharmacy degree from Columbia University in 1904. He heard about phenolphthalein, a tasteless powder that was a laxative. Kiss experimented with combining phenolphthalein with chocolate and created a pleasant tasting laxative, far more palatable than castor oil which parents had to force down their children’s throats. In 1907, Matz, by that time a wholesale dealer in drugs and chemicals, joined forces with Kiss to form the Ex-Lax Company. Matz, in addition to his business interests, was deeply interested in the renaissance of the Hebrew language and was the publisher of the New York Hebrew journals Ha-Toren and Bitsaron. According to Abraham Shalom Orlans, author of an obituary of Israel Matz in Ha-Doar (30 Shvat 5710 = February 17, 1950), Matz advertised Ex-Lax only in the Yiddish [and Hebrew] press from 1907 until 1927. He wrote many of the ads himself and carefully reviewed the ones he did not write himself. This ad campaign was so successful that the Ex-Lax ads helped prove the worth of advertising in Jewish newspapers to general advertisers. It would be interesting to verify this claim, since American artist Edward Hopper’s 1927 painting, “Drug Store” features Ex-Lax on the window of the pharmacy in the painting; Hopper, born and raised in Nyack, NY, moved to Washington Square in 1913; perhaps the proximity of Greenwich Village to the Lower East Side explains Hopper’s familiarity with this scene.

In addition to his support of the Hebrew and Yiddish press, Matz established the Israel Matz Foundation to help support indigent Hebrew writers. Matz donated shares of Ex-Lax to the Foundation and the proceeds provided income for the fund. A folder recording some of the foundation’s activities and disbursements between 1925-1935 is in the Peter Wiernik Collection held in the Yeshiva University Archives.

Israel Matz made his mark in the business world and the world of Hebrew literature; his ads for Ex-Lax bridged both worlds. When read today, many of the Hebrew ads have an almost spoof-like quality, such as one from Ha-Toren (August 1922), an odd marriage of an advertisement and the genre of women’s prayer: “One who has problems with his digestion will be healed with Ex-Lax, as it states in Yalkut Ha-Refuot (Compendium of Remedies, a fictional book). Happy is the woman who always keeps a box of Ex-Lax at home; she can be assured that this box will serve her and her family as a shield against many types of sickness. She is assured that doctors will have no power in her home, and she will never need to waste her money on medicines.” Other ads, such as the ones in the Nir, where the jarring juxtaposition of the biblical Hebrew with the content of the ads renders them almost humorous, made them a perfect topic for Purim, especially when placed near Puterman’s faux menu, as the editors of The Yeshiva News GRAGER realized in 1932. Let’s hope that Mr. Puterman had a sense of humor.