The Women’s Branch of the Orthodox Union, Pioneers of Passover Provisions

The Children of Israel were redeemed from Egypt in the merit of the righteous women of that generation (Sotah 11:2); women are obligated to partake of the four cups of wine on Passover, since they participated in the miracle (Pesahim 98:1-2); and in the twentieth century in the United States, the “kosher keeping” community must thank the Women’s Branch of the Union of Orthodox Jewish Congregations of America (Orthodox Union / OU) for pioneering the kosher and kosher for Passover food industry in the United States.

In 1924, the Women’s Branch, under the leadership of women such as powerhouse Rebbetzins Rebecca Fischel Goldstein (married to Herbert S. Goldstein, rabbi of the Institutional Synagogue) and Julie Hirsch Klein (married to Philip Hillel Klein, rabbi of Congregation Ohab Zedek), partnered with their husbands and worked with Sunshine Crackers to organize rabbinic kosher supervision under the auspices of the Union of Orthodox Jewish Congregations of America. Sunshine Kosher Crackers embarked on advertising campaigns in the Yiddish press to promote its crackers; the ads emphasized the company’s kashruth, concern for Jewish law, and awareness of the Jewish calendar. This ad, set in a kitchen which is being “turned over” after Passover, reminds customers: “After Pesach, Sunshine kosher assorted cookies are even more welcome;” you (the Baleboste, the housewife) worked so hard to make the home kosher for Passover, now after Passover you must be careful not to serve cookies with lard; only Sunshine guarantees the cookies you serve are both kosher and pareve. 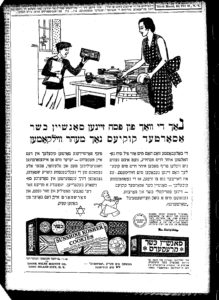 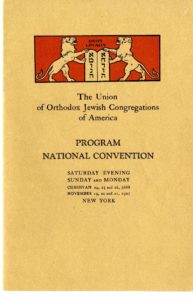 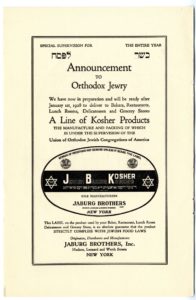 In 1927, the OU also entered into its most famous and long-lasting corporate relationship with Heinz and created the now renowned OU symbol. The Orthodox Union’s kashruth symbol has evolved over the years until the OU became standard; note the symbols in the 1927 Jaburg ad and the one in this 1933 one page flyer issued by the Orthodox Union’s Women’s Branch which shows a K in a circle within a star of David, as the kashruth indicator for Sheffield’s Farms Co. sour cream.

The 1933 flyer also refers to the “Passover Label of the Union of Orthodox Jewish Congregations of America,” unfortunately there is no sample of the Passover label. Similar kosher for Passover provision lists were produced by the Women’s Branch during the 1930s, under the leadership of Rebecca Fischel Goldstein, president of the Branch from 1924 through 1938.

How the Kosher for Passover market has grown since then! From a one page flyer in 1933 listing a limited number of kosher for Passover products and ingredients,  the Orthodox Union’s kosher for Passover directory in 2020 includes over 7,400 items in a 116 page booklet. The Orthodox Union also assures the public that despite the COVID-19 epidemic, there should not be any shortages of Passover food, and its website provides guidance for this unusual (and hopefully exceptional) year of pandemic and solo Seders. The directory does not mention the Women’s Branch which closed recently after ninety-five years of service to the Jewish community; its legacy lives on in many of the Orthodox Union’s endeavors.