On the Road to the State of Israel: the San Remo Conference, April 1920

The San Remo Conference is not as well-known as the Balfour Declaration in the history of key events leading  to the birth of the  State of Israel, but it may have been even more important. The purpose of the meeting of the World War I Allies in San Remo, Italy, a century ago was to determine the destiny of the former Ottoman Empire. The Conference enshrined the pledge of establishing a Jewish national home in Palestine, initially stated in the Balfour Declaration of 1917, in the peace treaty signed in San Remo. The Balfour Declaration thus officially became part of the British government mandate in Palestine. An article in the New York Times on April 27 exclaimed “Zionists Here Rejoice” at the news that the mandate in Palestine was awarded to Great Britain. 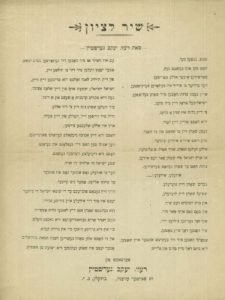 Reverend Jacob Gerstein of 28 Porter Avenue in Brooklyn, NY, expressed his joy at the news by writing a Yiddish poem which he published on May 11, 1920 as a single sheet. Though the poem was in Yiddish, the title was in Hebrew, “Shir le-Tsiyon,” A Song of Zion. This poem is not recorded in World Cat; a lone copy was found in Yeshiva University’s Cantorial Manuscript #151. The poet rejoices that Jews, who have suffered in the past, will now have a land and will no longer need to wander;  Jews can say good-by to 2000 years of exile. Everyone, even someone who is blind, will see that the Land of Israel belongs to the Jews. Every year Jews cried out “Next Year in Jerusalem” and now redemption has come. The date of the publication of the poem indicates that it was inspired by the San Remo Conference, although it is not explicitly stated.

Gerstein (ca. 1866-1938), though not listed in biographies of American rabbis, was not a completely unknown figure.  Several works he wrote, including rhymed versions of a Talmud tractate and the Book of Esther, are noted in World Cat. An immigrant to the United States from Russia (ca. 1905) he expressed his view of America as “the land of the free.” He was interested in world events, especially as they affected Jews and Jewish interests; he wrote a bilingual English-Hebrew “Scroll of Victory” at the end of the First World War which he sent to President Wilson, and in 1933 he published  “A letter of blessing and thanks in English and in Jewish to Pres. Franklin D. Roosevelt.”  He also authored more traditional rabbinic works which include sermons and correspondence. Though perhaps not a major personality in the Jewish scene in early 20th century America, he may personify a type of rabbinic figure of the time: a religious, intellectual, immigrant Jew, a writer and poet, conversant in Yiddish, English, and Hebrew; active in Jewish organizations (in his case,  Cong. Hevrah Kadishah and Daughters of Zion Hebrew Day Nursery in Brooklyn) appreciative of America and a lover of Zion, who turned his hand to poetry in celebration of the decision at San Remo.